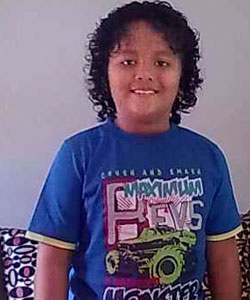 Our little Azaan Rustam Shaah is all set to make it big on the Silver Screen with none other than the Khiladi, Akshay Kumar and Dabangg beauty Sonakshi Sinha in their upcoming movie Joker. The young lad has just completed the first schedule of the movie which was shot in Chandigarh and is all set for the second which will be in Mumbai.

Speaking about the experience, Azaan says Telly Buzz "The experience was great with Akshay Kumar and Sonakshi Sinha. They are very nice and they both used to play and have fun with me always."

Azaan excitedly adds "Farah maam (Farah Khan) used to appreciate me a lot because I used  to give the shot in the very first take."

Speaking about her son's character in the movie, Azaan's mother says "The character name is Gopi and it is a very important one in the movie. I cannot reveal more about the character because the schedule is not yet over and it would be unfair on the part of the crew and the movie".

Well, Azaan has already showcased his talents in several television shows,  and is  presently seen in Star Plus' Pyaar Mein Twist and [V]'s Parindey.

Bollywood is a dreamland that everybody from tellydom would like to be a part of, and we have seen various actors struggling to make their mark. And now we have a young, in fact the youngest addition in the Bollywood industry.

We wish this talented young star all the very best in his future ventures!!!

saraaa. 9 years ago Wow! I remember watching him in Shree .. he's a pretty good actor for a young kid like him ..
wishing him all the best

sweet_angel27 9 years ago Awww he's so cute. :)Haven't seen hlim in any other movies, hope to see his acting skills in this one :)

Pori 9 years ago all the best Azaan baby... u are shooo cute and very talented.. hope u do extremely well in life=)

yipee 9 years ago awww i just love azaan...he is an adorable kid

Parth Samthaan: Kasautii Zindagii Kay has shaped me as an ...
3 minutes ago

"Sushant Singh Rajput died by Strangulation and Not ...
58 minutes ago