With the new twist and turn in the serial Sapna Babul Ka…Bidaai, the story line of the serial is taking a complete turn and many new faces are making their entry into the serial. The next one in line is Avinash Wadhavan, the actor from the big screen. He already has few films to his bounty and has also done a role in the serial Durgesh Nandini. Presently, Avinash is going to make his entry in the serial Bidaai from next month. 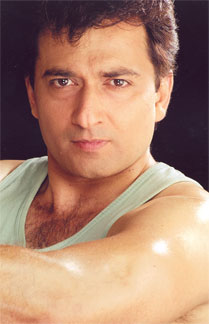 Featured Video
His role in Bidaai is of a business tycoon opposite Seema Kapoor. On asking about the role Avinash said, "I am playing the character of a rich, flamboyant business tycoon and Seema Kapoor is my wife. I have two sons who are paired opposite the two lead girls. Basically he is a very powerful man and gives every luxury to his family other than time, though loves them a lot." So how much does he relate himself to the character? "I am an actor and have never done business. But I have a set of friends who are businessmen, so I learn from them the way they talk and all. This is first time I am playing the role of a business tycoon," is what Avinash had to say.

Rajan Shahi, the Series Director and Producer when inquired reasons for choosing Avinash for this role said, "Priority for choosing him for the role is that he is good looking and a good actor. Also he suits the character and is going to play an important role in the serial." Giving more information on the two main lead hero's entry into the serial Rajan remarked, "Entry of the lead is a very important part of the serial. Recently there was a break up and twist. I want to keep it in wrap and I may not yet disclose the name of the leads," and then added, "The leads may enter in February."

Avinash is also seen in Sony's Amber Dhara. "I am playing the character of father to Soniya who loves Akshat. Also he loves his daughter very much and can do anything for her," confirmed Avinash. He will be playing the role of Soniya's father who incidentally is also a friend of Akshat's mother being played by the actress Jaya Bhattacharya. As the story progresses, his character may get a grey shade. "Yes it might get a little bit grey. When the engagement of my daughter breaks, the character will take a turn too," says Avinash.

Even though the actor's career in Bollywood did not take off that well, viewers can now get to see him on Television in different roles. Except for these two projects the actor doesn't have any other project on television just now though is shooting for a Bhojpuri film and a Punjabi film.

+ 3
14 years ago Thanks!
i didn't even know Sonia's father in Amber dhara was Avinash wadhawan..lolz!

+ 5
14 years ago Thanks for the info, thats great, just waiting for the 2 boys to be introduced.