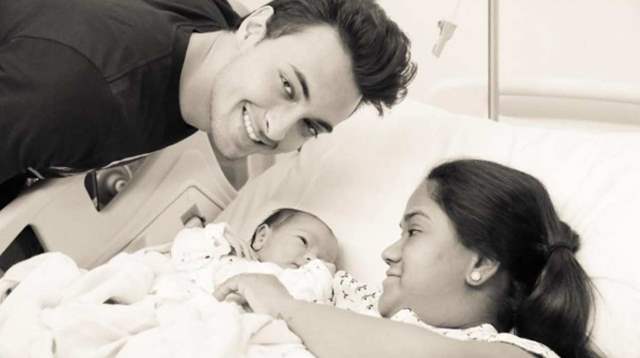 Arpita Khan Sharma and Aayush Sharma who were expecting their second baby have been blessed with a baby girl.

This morning (December 27,2019) at around 8:00 am Arpita reached Hinduja Hospital, Mumbai along with Aayush and soon after getting admitted in the hospital the doctors took a few tests and started preparing her for the delivery.

As per our close sources, both the mother and the baby are doing fine and the complete Khan Khandaan and Arpita's in-laws are at the hospital.

Now, the proud parents have revealed their little princess's name.

"They have named their baby girl, Ayat Sharma which means "miracles of the holy Quran". The name Ayat comes from an Islamic word which refers to the verses of the Quran. It is of the Arabic origin and it's associative meanings also include ‘miracles’ or ‘proof’ that describe the verses in the Quran."

Aayush took to his social media account and posted a picture revealing their baby daughter's name. Alongside the photo he wrote: "We’ve been blessed with a beautiful baby girl. Thank you so much for all the love and blessings for Ayat Sharma"

As reported earlier, the mommy-to-be for the second time wanted to give the best birthday gift to her Bhaijaan Salman Khan and hence she and husband Aayush decided to go for a scheduled delivery on his 54th birthday today.

For a long time there were reports about Arpita being pregnant making rounds in the media, but it was only at the green carpet of IIFA 2019 that both, Arpita and Aayush had confirmed the news to the media.

During their interaction, they had told the media, “The new arrival is very exciting. Yes, Arpita and I are expecting a second baby. It’s been such an amazing journey. It starts all over again and we just’ can’t wait for the baby to come.”

We at India Forums, wish heartiest congratulations to Arpita and Aayush on the arrival of their little bundle of joy.

Sanjay Dutt returns home after being admitted to the ...
8 minutes ago

Satish Kaushik Recalls 41-years of struggle and Courage to ...
18 minutes ago

exclusive
Exclusive Avneet Kaur: I really wanted to create some content for the ...
28 minutes ago

Rubina Dilaik On Participating in Nach Baliye 10 With ...
2 hours ago
View More
TOP