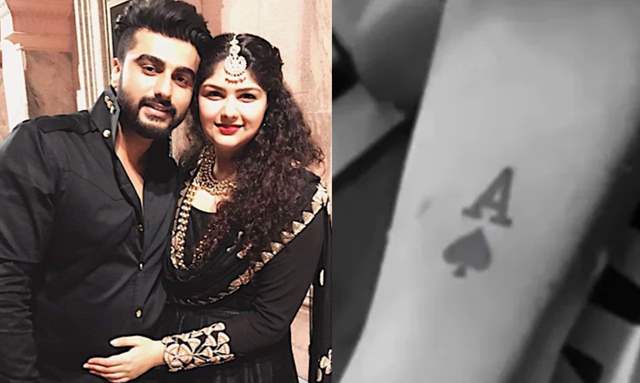 Bollywood actor and courteous brother Arjun Kapoor holds high regards for his sister Anshula Kapoor. In a recent interview with Siddharth Kannan, Kapoor opened up on facing tough times and couldn't stop praising sister Anshula, as to how she has sacrificed so much for him.

Now, to honour his sister, Arjun got a new tattoo on his left wrist and got the letter A inked along with a ‘shades’ sign, symbolizing the Ace of Spades. Dedicating it to his sister, the Sandeep Aur Pinky Faraar actor called her ‘ace up (his) sleeve’.

Sharing the video on his Instagram Reels, Arjun Kapoor shared a video of himself getting the tattoo and tagged Anshula Kapoor on Monday. His caption read: “She is the Ace up my sleeve. @anshulakapoor & I, intertwined forever in life & also by the letter A.”

Meanwhile, fans also showered love. “Omgggg this is absolutely amazing and such a lovely gesture!!! @arjunkapoor,” one commented. “So beautiful bond forever bro sis,” another wrote. “Love to both of u,” a third said.

Arjun Kapoor shares a close bond with his family and during a recent interaction he said that he understands why his father Boney Kapoor fell in love with Sridevi, he can't say what happened to his family at that time was 'okay'.

Earlier in May, the 35-year-old actor shared an endearing post for his mom, Mona Shourie on Instagram just a day after the world celebrated Mother’s Day (May 9). It has been 9-years since her sad demise, and Arjun says he still feels lost without her. The Sandeep Aur Pinky Faraar actor had shared a throwback picture with a note.