The news that the ‘Queen of Soaps’ Ekta Kapoor called the Bidaai girls, Sara Khan and Parul Chauhan to offer them a role in her new project has spread like wild-fire now!! 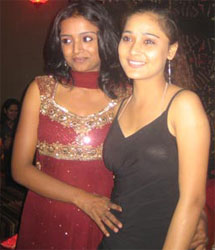 A very elated Parul says, “Sara was at my place that night and had come to meet my mother who was going back to Lucknow when we got a call from Ekta Kapoor. Ekta put us on a conference call and offered me, Sara and Ali Merchant a role in her new project which will be replacing Kyunki Saas..”.

Echoing the same sentiments as Parul, Sara states, “Yes, it is true that Ekta called us. I would really want to work with her in future, but as of now, Bidaai remains our priority”.

“We were really shocked and surprised when Ekta called. But we refused the offer as Bidaai means a lot to us and this serial has got us a name in the industry”, quips Parul.

Telly Buzz called Nivedita Basu, Creative Head, Balaji Telefilms to confirm whether Ekta’s flagship serial on Star Plus, Kyunki Saas is ending and also on Ekta’s offer to the Bidaai girls. But Nivedita’s answers came as a shocker as she said, “Why will Ekta go and call the girls?? Ekta has not called anyone and this is the fact”. On Kyunki nearing its end, Nivedita quickly says, “Kyunki is not ending, we are doing well and there is no reason for which we have to shut shop”.

Later, when we called Parul and Sara to tell them that the creative from Balaji claims that Ekta did not call them, the girls stated, “We really do not know what is happening. But it is true that we got a call from a lady who said she was Ekta Kapoor”.

We tried to get Ekta Kapoor as well as Anupama Mandloi, Senior Creative Dierctor, Star Plus on phone, but they remained unavailable for comments. However, when we buzzed Rajan Shahi, Producer of Bidaai, he said, “The girls told me that they got a call from Ekta. I am really happy for them, but cannot comment further”.

However, we tried to dig deeper into the matter and found that Ekta is slowly but steadily planning to end Kyunki Saas. Our source states, “There is every possibility that Kyunki might go off air in the coming year, and the renewal in contract that is supposed to happen in October this year might be the last extension for Kyunki”. Our source also gives us information that Kahaani Ghar Ghar Ki and Kasturi might also shut shop by next year.

Now, the question is - Is it true that Ekta approached the girls? Or is it that someone played a dirty prank on them?? If so, how will Ekta Kapoor react to the situation now?  With so many different versions laid before us, we wonder where the right side of the story lies!!

Broken But Beautiful 3 actress Tanvi Shinde: It's a privilege to get ...

12 years ago i dnt wnt thm 2 go away frm bidai! i hp thy sty!! and hp thy dnt gt any trble!! i thnk their fantastic!!!! kyounki is great! but its bn running for a long tme so i dnt blme thm if thy end it! but i lv kasturi its good! i hp thy dnt end it!

12 years ago Can anyone tell us why Kasturi shut down unless they want us to get a happy ending - which would be a good thing but then where will see Karan Patel?

+ 2
12 years ago OMG. NO COMMENT. Ekta is suing my two girls? Grrrr! *Head explodes*...aargh, EKta is making Sara & Parul pay for something that wasn't even their fault! And why would my two girls need the publicity from Ekta? Are her shows better than Biidaai? Biidaai is the best show on STAR Plus beating KDMHMD, KSBKBT, KGGK and so on! I hope all her shows go off her! She has lost respect from me! =(

12 years ago I hope at least the part about Kyunki going off air is true!!!

12 years ago ekta has a ego problem..nd she never calls anyone then why wud she call sara nd parul..that's weird! Definitely, a prank played by sumone... ohi hup kggk ends soon...bcoz its kinda crappy...kyunki is phir bhi better...well, ekta has changed..her shows are ending ryt after kzk...its goin to be kuch iss tara nd more on..

+ 4
12 years ago woow intresting!
i think it was a prank.. Played by someone
and yeah kyunki ending omg how long was that on for ..
Thanks Alort x

12 years ago wow thank god Kyunki is going to end...i remember when i was in grade 3 or 4 it was started and now im in grade 11 oh lord how long!!!

12 years ago sounds like kyun ki will end soon. glad 4 that.

12 years ago hmm in all likelihood it seems to b a dirty prank n nothing else but sara n parul are good that they refused to leave bidaai it shows how down to earth they are... But seriously ksbkbt is ending? Thank god!! Finally ekta is doing people a favor and slowly putting an end to some of the most irritating and repetitive shows she's made (no offence to any hardcore fans of the shows) but kyunki n kggk are crying out to end my lord I can't stand them anymore been going on too long but I'd b sad if kastiri ended that show just started a year ago n its not thatt bad

12 years ago i think its good that its ending imean it has beeen there for more then 7 to 8 years...so i think it should now get replaced...

Raavi accuses Rishita for spoiling the cement; Dev and Shiva’s ...