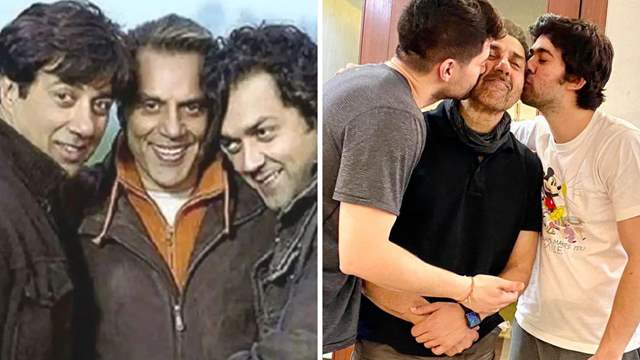 The Deol trio Dharmendra, Sunny Deol and Bobby Deol featured together in the movie Apne back in 2007. The sports drama also starred Katrina Kaif, Shilpa Shetty, and Kirron Kher in the lead roles and was a success at the box office. And now after 14 years, the trio is reuniting for the sequel Apne 2.

This Guru Nanak Jayanti just got more special, when the makers and the family decided to announce it’s sequel with the blessings of Guru Nanak Ji.

After 14 years, the team is up for an encore. Joining the terrific trio this time will be Sunny's elder son Karan Deol, and that makes this project even more interesting!

Check out the announcement below:

The makers will be shooting from March next year, in Punjab and Europe and the family entertaining sports drama is being readied for a grand release on Diwali 2021.

Legendary actor Dharmendra shares, "Apne is one of the best films of my life. A joint effort by the whole unit, received very well by you all. Now, I'm very happy because I will get to shoot Apne 2 with my entire family - my sons Sunny, Bobby and my grandson Karan. It will be a very special film and I am looking forward to shoot."

Speaking of Apne, the film saw Dharmendra portraying the role of an ex-boxer Baldev Chaudhary who wants his real and reel life sons Sunny and Bobby aka Angad and Karan, respectively, to carry forward the legacy.

Directed by Anil Sharma and Produced by Deepak Mukut, Apne 2 releases on Diwali, 2021.