View Profile
Rumor has it that actress Anushka Sharma, who managed to make it big with her major BO success Band Baaja Baarat, is trying her best to join Bollywood's current 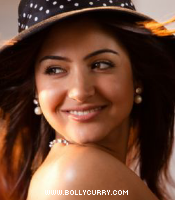 BO-King Salman Khan's camp. Apparently, she wants to partake in the recent string of successful movies from the macho man and increase her already long list of much loved movies.
Seems like she is keen on working with Salman, who has two films lined up for Yashraj a.k.a Aditya Chopra's banner,  which Anushka is a product of. She's been sending out feelers to everyone involved about her wish to star in one of those films opposite her current favorite leading man.
Sources close to the starlet reveal that she's been wanting to share screen space with Salman for quite sometime now. She doesn't want to miss the golden opportunity to work with him seeing as he has signed with the YRF banner. She is definitely not leaving any stone unturned to make it happen.
Her sudden interest may also be because of her rivalry with Sonakshi Sinha, who's really close to Khan. With their cold war of sorts over their boy-friend issues still unsettled, speculations exist that Anushka may just be trying to annoy her by being close to her mentor!
Whatever, might the reason be, we would surely like to see Anushka and Salman alongside one another, won't we?!