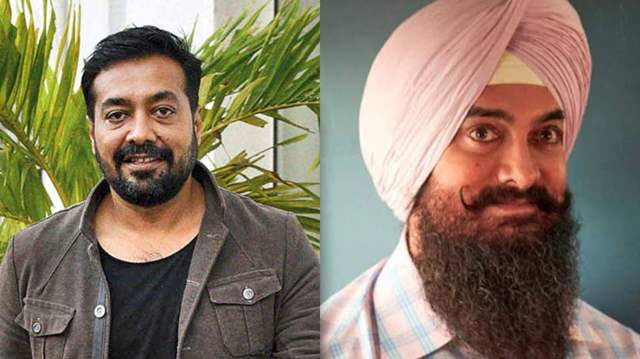 Filmmaker Anurag Kashyap is currently busy promoting his film Dobaaraa also quirkily titled 2 12, the film promises to be a cliffhanger, with the theme of time travel driving the plot. Taapsee’s character has to juggle two different worlds in her past and present avatars.

Well, talking about which the director along with Taapsee and Pavail Gulati were seen in a live youtube session candidly answering fans' questions. The team was waiting for their film's song Waqt Ke Jungle's release, until then they had a fun interaction with fans.

The team talked about their survey for choosing locations for the film from South Africa, Marautius to Pune. They also talked about fun incidences from the set.

At the end of their live session, Anurag Kashyap took a dig at Aamir Khan saying,

Seems like this was a clear hint at Aamir Khan's Laal Singh Chaddha which is trending as the netizens have decided to boycott the film. Their feud dates back to 2015 when Anurag Kashyap had decided never to work with Aamir Khan, the actor who was supposed to head the cast of his upcoming film Bombay Velvet.

Talking about the film it is said to be a Hindi remake of the 2018 Spanish film Mirage, Dobaara premiered at the London Indian Film Festival in June this year, which was attended by Anurag and Taapsee.  Apart from Taapsee the film also stars Pavail Gulati, Rahul Bhatt and Saswata Chatterjee. It is produced by Shobha Kapoor and Ektaa R. Kapoor’s Cult Movies, a new wing under Balaji Telefilms, and Sunir Kheterpal and Gaurav Bose (Athena).