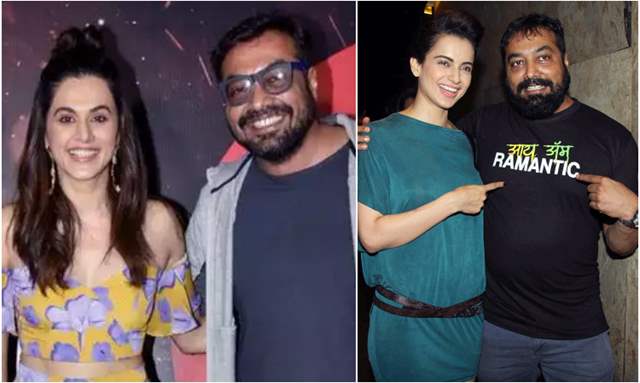 Kangana Ranaut has actively raised her voice for Sushant Singh Rajput and his sad demise. She has also shocked everyone with her claims and even went on to reveal some of the grimmest realities from Bollywood and its celebrities. She has shelled out a barrage of attacks at actors, filmmakers, and many others who have been the catalysts to the rising injustice in the industry.

While she has called out celebrities and friends from her sphere, many have expressed their dissatisfaction with her remarks and turned her relationships sour. Filmmaker Anurag Kashyap recently revealed that he used to be good friends with Kangana Ranaut, but now he doesn’t know the 'new Kangana'.

It seems this social media feud might not see the conclusion anytime soon as Kashyap also revealed that he tried playing a peacemaker between Taapsee Pannu and Kangana.

During a recent interview with NDTV, Anurag Kashyap said,  “Taapsee is also a friend and I said that two friends are there and why are they saying things to each other... I called her (Kangana) and asked her and she put the whole conversation on social media and I was just there like a friend trying to sort things out.”

Kangana soured her friendship with Taapsee and Anurag when they had a hearty laugh on a question about her during their Manmarziyaan promotional interview in 2018. Kashyap even revealed, ‘Kangana was hurt’.

"I am saying okay if you are hurt by that, I will apologize for that. That's what friends do. But she has gone on to a mode where 'If you're not with me you're my enemy’,” added Anurag Kashyap.

Meanwhile, Kangana continues to hurl allegations with her insider vs outsider debate. The Queen actress has repeatedly taken a dig at several A-listers and many other celebrities in Bollywood.

Indian Idol 12: Team starts shooting for final round of ...
24 minutes ago

Sidharth Pithani to record statement under 164 CrPc, may ...
26 minutes ago