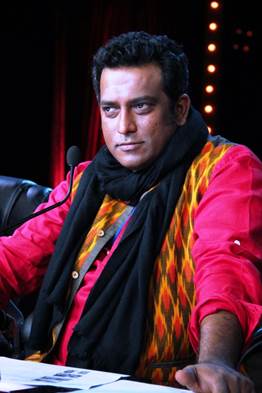 Having sensitively addressed mature themes through his films, Basu is known for getting the best out of his actors. While he is quite a task-master when it comes to work, his sense of humor is something that will make the contestants feel at ease while auditioning in front of him. Having been in the industry for decades, Anurag comes with immense understanding of gauging an actor's abilities and selecting the right kind of talent.

Talking about his association with the show, Anurag said, "As a director, I could connect with the idea of Cinestars Ki Khoj which is to search for the most promising acting talent in the country and provide them with a platform on national television to showcase their acting ability and creativity. I think the pool of talent we have in our country needs that, given how difficult it is for a talented outsider to make an inroad into the industry and land a suitable role. When I was approached to come on the show as a judge, I took it up as I felt it would be a great opportunity to come in touch with fresh talent, new ideas and the contestants could benefit from my insights and experience. This is an extension of my work with Zee TV that started with India's Best Dramebaaz."

A little unhappy about joining the show late, he added, "I was away in South Africa for the shoot of my forthcoming film. Would have liked to be a part of the journey right from the outset ideally."

Apart from judging a reality show the second time, Anurag was glad to have been paired with Sonali Bendre- with who he has worked in the past. Ensuring a lot of dhamaal and great potential, Anurag will soon be seen having a blast alongside two judges and the anchor of the show - Hussain Kwajerwala!

Lady_Impala 6 years ago Oscar nominated barfi?? when did that happen. it was India's entry for the Oscar's but never got selected.

sali195 9 years ago why isn't saibo in the top 10 anymore, it is a great song and deserves to be in the top 10. Quite a few of these songs in the top 10 are really not that good at all, so dunno why they are positioned so much higher than they should be in the charts.

nuttycleo 9 years ago no offense, but Chal kudiye better than Saibo?

rose-girl 9 years ago half of thm aren't even worth listening...saibo and Saathiya should hav been included:)

Shreyacool 9 years ago The only song I like from the list is Character Dheela. Saibo is a beautiful track & I still consider it better then the ones in the list.

BittuJi. 9 years ago songs these days are -_-
haven't even heard half of them.