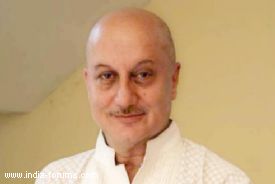 Both Anupam and Keira have previously worked together in Gurinder Chadha's 'Bend It Like Beckham'.

'Was happy to meet Keira Knightly at #Tiff after a gap of 9yrs of 'Bend it Like Beckham',' Anupam wrote on microblogging site Twitter. The actor was there for the premiere of his film 'Breakaway', which is Akshay Kumar's first Indo-Canadian production venture.

Vipin, who participated in the musical reality show 'Idea Rocks India', has also been chosen to be a part of 'The Unity of Light' concert with Oscar winning composer A.R. Rahman in Malaysia and Dubai.

A management graduate from the US, Aneja has worked in Hindi and Punjabi pop albums and ghazal albums.

Sophie Chaudhary down with fever

Singer-actress Sophie Chaudhary is suffering from fever and a sore throat and is finding it hard to cope with it.

'Battling fever and a sore throat! Hate being ill! Arghh! And got a shoot today! Hmm, shall try and trick my mind into believing I'm fine!' Sophie wrote on microblogging site Twitter.