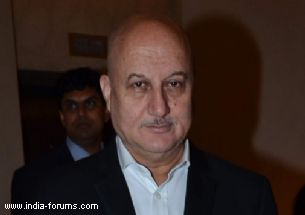 Bollywood veteran Anupam Kher has been appointed to conduct an acting workshop as part of the International Indian Film Academy (IIFA) Weekend and Awards in the US later this month. His directorial venture, a short film, will also be screened.

IIFA is scheduled to make its US debut this year. It will be held in Tampa Bay, Florida April 23-26.

The world premiere of Anupam's directorial "I Went Shopping For Robert De Niro" will be held on the second day of IIFA after he hosts an acting workshop for the students of the University of South Florida (USF).

The premiere will be open to celebrities from the Indian film fraternity, who will be seen attending the screening and lending support to the actor.

"Having the world premiere at IIFA in Tampa Bay, Florida, showcases in essence the spirit of the short film, where a group of Indian artists pay tribute to the American legend," Anupam said in a statement.

De Niro had even visited the actor's Mumbai school Actor Prepares and interacted with actors, directors, students and teachers about his work, characters, scripts, co-actors, his films, his associations with filmmakers, et al.

Anupam, who has been entertaining Hindi movie buffs for 30 years, has been a part of films like "Lamhe", "Dilwale Dulhania Le Jayenge", "Khosla Ka Ghosla" and "A Wednesday", and he has also regaled audiences with crossover movies like "Bend It Like Beckham" and "Bride and Prejudice".

His international projects include Woody Allen's "You Will Meet A Tall Dark Stranger" and "Silver Linings Playbook".

Anupam is excited about sharing his knowledge of acting during IIFA. The workshop will be open to students of USF.