View Profile
Anupam Kher starrer comic flick Mr. Bhatti Ki Chutti is ready to hit the cinema halls very soon. The versatile actor looks excited about the character of Bhatti portrayed by him in the film. “Mr Bhatti as a character is international and our aim is to make him an icon. Mr Bhatti was born in Nala Sopara, was a bank manager who kept thinking someone was following him, aspired to be a detective, had a fear of dogs, was shy of women, and was a staunch fan of Mr Bachchan. He has the 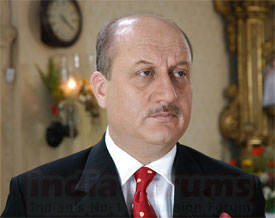 Director Karan Razdan feels that via Bhatti he is talking about a very serious problem in a hilarious way. "The film is a comedy. But in the larger sense, it talks about Bhatti's peace plan in a world ravaged by war and hunger. Bhatti with his sense of humour is actually tackling serious global issues. The film is also a celebration of Mr. Amitabh Bachchan's stardom. He plays Mr. Bhatti's conscience and also his inspiration”, utters Karan Razdan. Karan further adds, “If you wish to say something serious, sometimes the best way to do it is with a sense of humour."

Producer Ashwani Chopra only seemed to agree as he announced two Bhatti sequels, "Bhatti Bhatti Bang Bang to be shot in Bangkok and Bhatti in China, obviously to be shot in China".

The makers felt that film had the potential for a series as memorable as the Chaplin. Anupam says, "In every actor's repertoire, he essays one role which he would like to be remembered, and which he would like to reprise. Mr. Bhatti is one such role for me. I have being a staunch Chaplain fan all my life and if I achieve even one-tenth of what he did, it would be a remarkable achievement".

Well, taking a look at the past career of Anupam Kher’s it seems India would soon have his own Charlie Chaplin. - (SAMPURN)