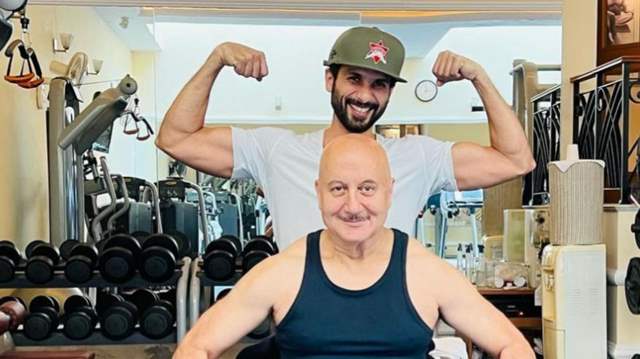 Bollywood actor Anupam Kher is enjoying the success of his recently released film, The Kashmir Files, which has become the most talked-about film of the year. At the box office, it has garnered a huge reception.

The Dilwale Dulhania Le Jayenge actor is quite active on social media, and he frequently shares tweets in which he provides his followers glimpses into his current projects.

"Delighted to meet the #Jersey guy, co-actor and a dear friend @shahidkapoor in a gym in Delhi! He is here to promote his film and I am shooting for #Uunchai! Good luck my friend for the release. Loved the trailer. Jai Ho! #Actors #ActorsLifeforMe #Gym #YearOfTheBody".

In the photos, we can see Anupam and Shahid posing for the camera as they reunite with each other.

On the professional front, Kher is getting ready to start filming IB 71, his 523rd film, alongside Vidyut Jammwal. The film is set during the 1971 India-Pakistan conflict. Sankalp Reddy, a National Award-winning director, helms the spy thriller, which is produced by Bhushan Kumar, Action Hero Films, and Reliance Entertainment.