Sajid Khan’s talk show Sajid’s Superstars to be aired on the new channel COLORS will have Anil Kapoor as one of the guests besides thirteen others. Sajid Khan is surely in his typical wickedly, superb form on the show, but same is the state of his celebrity guest, Anil Kapoor.. 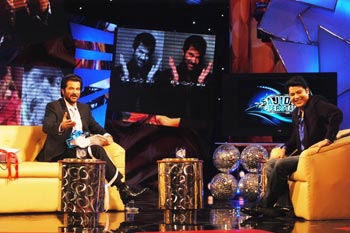 Featured Video
When Sajid shoots at him the question “Have you ever had one night stands, affairs and relationships, Anil?” pat comes Anil’s reply “Why, I continue to have them even now!" One of the discussion point in the chat was regarding the rumor during 80’s about an allegedly gay relationship between Anil and Jackie!! When Sajid inquires about it Anil replies back very candidly, "Oh, of course, our relationship exists even today. Though now the attention is on Shah Rukh and Karan Johar, Jackie and I are a pair of has-beens!"

In his incisive way Sajid also touches upon the “Awards for Money” controversy where Anil got charged with for his Best Actor award for the film "Beta". Anil does not hold back and clears the air once and for all.

Looks like the show surely makes for riveting viewing!!! Sajid's Superstars has 13 episodes with 13 hot celebrity guests and secrets tumble out in each episode. The show goes on air on COLORS in July so do not miss it.

14 years ago ohhhh i wanna watch this show ......its sajid khan omg he is funny and guys does anyone know which channel is going to bve

+ 3
14 years ago will this channel be available on DISH NETWORK?