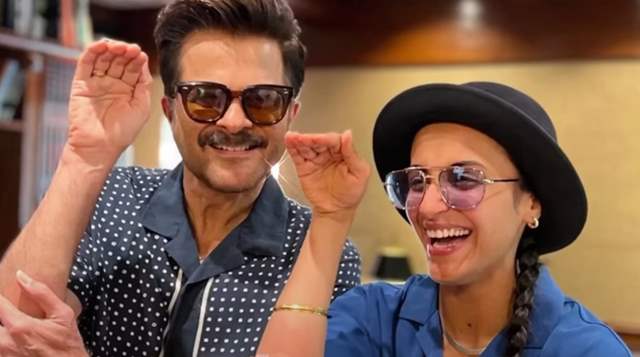 Anil Kapoor is an actor who has often defied his age. The 65-year-old actor is full of energy and can compete with the younger ones with equal enthusiasm. It is always a treat to watch the Nayak actor on the screen. The actor is already generating buzz for his upcoming film JugJugg Jeeyo, which also stars Varun Dhawan, Kiara Advani, and Neetu Kapoor.

He is going all out to promote the film and is quite enthusiastic about it as well. Anil is currently gaining notice for his latest video, in which he can be seen dancing to the JugJugg Jeeyo song Nach Punjaban.

Ruhee Dosani, a well-known digital artist, posted the video. Anil and Ruhee seemed to be dynamic partners in the video, shaking a leg to Nach Punjaban's music. Anil, in fact, looked dashing in his blue shirt and denims, and his enthusiasm caused everyone to tap their feet.

The two were also observed copying the song's hook stride, and their chemistry was flawless. Ruhee captioned the video as,

JugJugg Jeeyo, directed by Raj Mehta, is about two generations of couples dealing with post-marriage troubles. According to a report by Pinkvilla, "Even though the main protagonists in both films are two spouses, the approach and narrative are very different. "

Jugg Jugg Jeeyo is more about families, and the tie a married son has with his father and mother, which is depicted by Anil and Neetu in the film".The family drama's trailer has received a lot of praise. JugJugg Jeeyo, which also stars Prajakta Koli and Maniesh Paul, will hit theatres on June 24.