One fact about Bollywood heroes is that they've got the girls swooning over them, since the beginning of eternity. If you've ever wondered what is it with the heroes that keeps both, the female and male audiences glued to the screens, bring out the popcorn and sit tight as we at BollyCurry present to you the 'Idiot's Guide' to a Bollywood Hero.
1. Six-Pack Abs 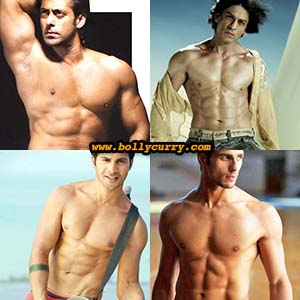 There was a time when the hairiest hero could throw off his shirt and have the audience as well as the director of the movie swooning at their mere sight. Gradually, we started wanting our heroes to have perfectly waxed and sculpted abdomen with six-pack abs. But even that doesn't seem to be enough, since quite a few have begun working out for 8-packs. It doesn't matter if the hero is a college going student (Varun Dhawan and Sidharth Malhotra in Student of the Year [2013]) or a forty year old dad of three (Shah Rukh Khan in Om Shanti Om [2007]). Having a perfect body makes the hero oh-so-desirable for the audience, so even if the movie boasts of nothing except a shirtless Salman Khan, it is enough to set the cash registers ringing.
2. Dancing skills that could give Michael Jackson a Run for his Money 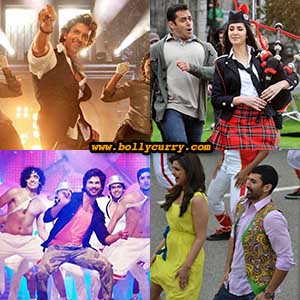 Few days ago, Hrithik Roshan in Bang Bang [2014] burned the floor with his fantastic dance moves, while he was supposedly in the middle of saving himself and Harleen (Katrina Kaif) from the bad guys. It does get one wondering about where does the hero find the time to learn how to break dance in fancy locales while he's busy saving his backside from numerous goons. Yes people! It does not matter what the hero's occupation is, he has to know how to dance, well. Whether he is a RAW agent like Salman Khan in Ek Tha Tiger [2011] or a cook like Aditya Roy Kapur in Daawat-e-Ishq [2014], he needs to have the moves that turn all the heads in the room! After all, don't we all just love it when the hero and his girl break out into a random, perfectly choreographed song and dance sequence right after a chase?
3. Go Shirtless 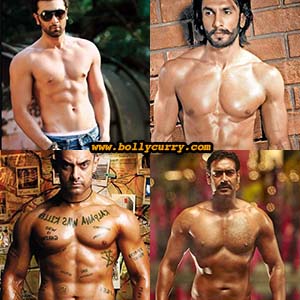 An actor cannot be a hero if he does not remove his shirt to flaunt his perfect body and get the audience salivating over the hotness he seems to exude. Whether it is in the middle of a fight sequence, the middle of a dance, or simply because someone walked in on them picking a shirt from their wardrobe, no one really cares about why is he half naked. All one needs to see is the fact that he's showing some skin, preferably without any hair on it.
4. Running after a Girl who is Half his Age 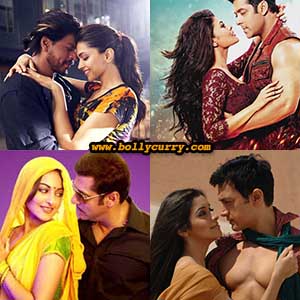 A hero is always running behind a girl in the first half of the movie to impress her. Surprisingly enough, the fact that he spends nearly half his time literally stalking the woman in question does not deter her. In fact, along with the heroine, the female audiences are smitten too! The heroine's importance to the story is a moot point, as who needs a strong heroine in a mainstream, male oriented movie? He should run behind the girl, romance her and take all the time he needs to make her his girlfriend or wife, the plot of the movie and the villain shall happily wait for him while she contents in resembling a flowerpot. Didn't Chhedi Singh (Sonu Sood) happily wait while Chulbul Pandey (Salman Khan) made his move on Rajjo (Sonakshi Sinha) in Dabangg (2010)? And wait, it definitely works better if the heroine is half his age. But then, if Deepika Padukone has no problem flirting with Shah Rukh Khan in Happy New Year, and Jacqueline Fernandes is happy hanging around Salman Khan in Kick, then why should we bother?
5. Doing Impossible Feats 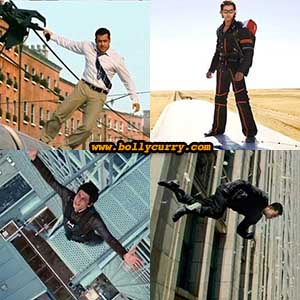 Is that a bird or a plane? Is it Superman? Nuh-uh! It is our very own Bollywood hero. He can jump from from the roof of one skyscraper to another, fight on the roof of a moving train, run on a bus, knock down 20 goons simultaneously, while dodging bullets. Even if gasp! the hero does get hit by a bullet, he will continue fighting till the cops arrive to arrest the villain(s), only after which he'll show signs of pain. It was as if a mosquito was biting him all this while, but don't you worry! He is the hero, he can't die at the hands of the villain, right? He will survive and have his happily-ever-after; using his secret weapon, superpowers. For more details on this secret superpower of our hero, watch Dabangg, Dabangg 2, Singham, Singham Returns, and while you are at it, watch the end of Chennai Express too, where a common man transforms into a fighter in a blink of an eye.
Wth these pointers, we conclude our Guide to a Bollywood Hero. These are just a few among many since we can't possibly list all of them out. We would probably have the film fraternity after our lives if we let out the entire secret! On the other hand, they don't know you all much, so feel free to make your own additions to the list, and we would love to see what our readers' take is.
Writer: Kalpana K.C. and Ritchelle C.
Editors: Pooja B. and Sonia R.
Graphics: Komal P.
Do you have a suggestion or comment for BollyCurry? Drop us a PM at BC_Dropbox today!
24 Likes