View Profile
Amrita Rao is popularly known for her girl next door image. Till now she has played roles that more or less portrayed her as a simple girl. However, with her upcoming flick 'Short Kut' she sheds her inhibitions along with her clothes. 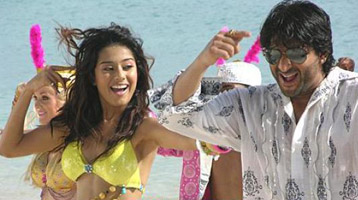 Amrita will be seen wearing 'skimpy' clothes in this movie. And no doubt she is just looking hot and gorgeous in her new 'avataar'.


'Short Kut' is a comic caper starring Arshad Warsi, Akshay Khanna and Amrita Rao in lead roles.The film is directed by Neeraj Vora,one who has directed 'Phir Hera Pheri'. Actor Anil Kapoor who turned producer with 'Gandhi My Father' is the producer of the film.


The music for the film is composed by Shankar Ehsaan Loy with lyrics by Javed Akhtar. The movie will also stars Chunkey Pandey and Simi Garewal. Anees Bazmee, who has given three back to back hits with No Entry, Welcome and Singh is Kinng has written the screenplay of the film.


The music of the film is expected to release in mid of December while the film will hit the theatres next year.