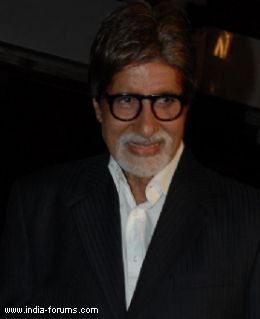 Bachchan was Thursday awarded an honorary Australian doctorate by the Queensland University of Technology (QUT) for his outstanding contribution to creative industries over several decades.

'I congratulate Bachchan on his honorary doctorate from QUT, an important academic institution in my home city of Brisbane,' Varghese said.

'Bachchan has made an inestimable contribution to global cinema and this prestigious award is a marker of the impact of his films in Australia,' he added.

'I want to thank Bachchan for his enormous contribution to global cinema. In accepting this award he will encourage the important cultural conversation between India and Australia,' Varghese added.

'Bollywood's popularity in Australia is growing, moving from niche to mainstream. When Aamir Khan launched his film 'Peepli Live' to a packed audience at the 2010 Melbourne International Film Festival, it was clear Bollywood had captured Australia's imagination,' Varghese added.

'The rise of Bollywood in Australia reflects the phenomenal growth that is taking place across the spectrum of the Australia-India relationship, from booming trade and investment to education links and two-way tourism.

'Quite simply, our countries are becoming more important to, and interested in, each other. And cultural ties are a critical element of the convergence,' he added.

Varghese said they are soon staging a major festival in India next year, which will showcase contemporary Australian arts and culture.

Bachchan is the second person to receive the honour. Infosys Technologies chief mentor Narayana Murthy was the first.

Bachchan was to receive the doctorate in 2009, but declined due to attacks on Indian students in Victoria.