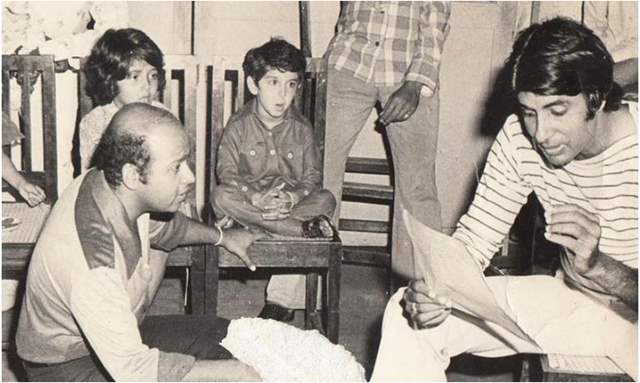 Actor Amitabh Bachchan is one of the most prominent personalities in Bollywood and, many actors have followed his footsteps to success. The legendary actor has an experience of more than five decades in the film industry, naturally, he holds on to some of the best memories and stories to share.

Being an avid social media user, Big B is known to share priceless pictures from the album of throwback that ranges across decades ago. Now, Amitabh has once again shared an iconic memory of sorts, which also featured a little boy who turned of to be the talented figures in Bollywood.

Taking to his Instagram handle, the Gulabo Sitabo actor shared a picture of him rehearsing for Mr Natwarlal's song while an observant Hrithik Roshan learns from the legend himself.

“.. the first song I sang for film .. ‘mere paas aao ..’ for Mr Natwarlal .. music rehearsal with Rajesh Roshan , Music Director .. AND .. all this being overseen by one ‘palti maar ke ‘ little one sitting on the bench ... a certain HRITHIK ROSHAN,” read Amitabh’s caption.

Check out the priceless picture below:

Meanwhile, on the work front, Amitabh Bachchan has 'Brahmastra', 'Jhund' and Nag Ashwin film in the pipeline. While Hrithik Roshan is reportedly a part of 'Fighter' directed by Siddharth Anand and the film will also feature Deepika Padukone.