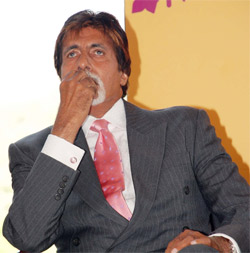 Featured Video
Mahindra's entertainment arm, Mumbai Mantra, that was followed by a fashion show in the evening featuring the stars from the film – Fardeen Khan, Irrfan Khan, Aftab Shivdasani, Dino Morea, Manoj Bajpai, Danny Dengzongpa the six swapping men with their guns and guts and the scintillating Dia Mirza in a naughty, catty avatar.

The men, who were dressed in suits, looked dashing, while Dia appeared hot and sexy. The actress' new avatar took the audience by surprise. The crowd went absolutely berserk watching the stars walk coolly and stylishly on the ramp.

One actor, whom people just could not stop talking about, was Manoj Bajpai. The actor had donned an absolutely new look for the fashion show. His sophisticated style and somber look send the audience into a tizzy.

And it was not only the audience who stood impressed! Manoj Bajpai's looks even took Amitabh Bachchan by storm. The veteran actor was completely bowled over by Bajpai's suave avatar and made it a point to shower compliments on him backstage.