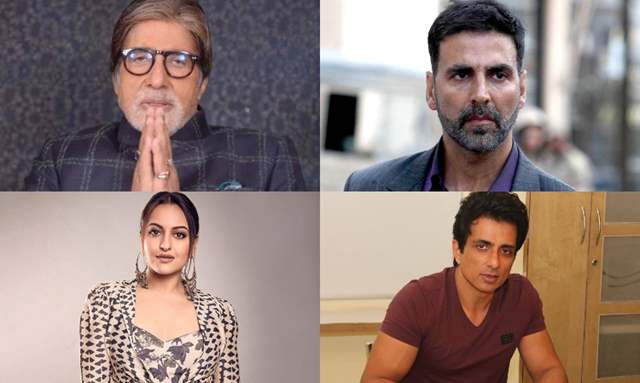 India and China are currently under political turmoil as the border dispute amongst the two countries has taken an ugly turn. Indian Army recently confirmed that 20 brave Indian soldiers were martyred in Galwan valley face-off. Meanwhile, Indian and Chinese military troops are headed towards a face-off in the several disputed areas along the Line of Actual Control (LAC) in Eastern Ladakh.

Now, Bollywood celebrities have taken to their social media handles and paid a tribute to the brave soldiers and expressed condolences for the bereaved families.

Sonakshi Sinha also shared her condolences to the families of the martyrs. “We will forever be indebted to you’ll and all those who fight for us putting their lives at stake. With utmost respect, deepest condolences to their families. #neverforget,” she wrote.

Sonu Sood shared the picture of a martyred soldier and wrote, “Santosh babu.. you will remain in our hearts forever. Your sacrifice will never be forgotten. We Salute you and your family for what you did for our nation. #GalwanValley” Neha Dhupia sent condolences for the bereaved families and wrote, “Condolences to the families of the soldiers who laid their lives down in #Galwanvalley ... we are indebted to these brave hearts for life ... Jai hind.”

Sharing the pictures of two brave Indian soldiers on Twitter, Akshay Kumar wrote, “Deeply saddened by the death of our bravehearts in #GalwanValley. We will forever be indebted to them for their invaluable service to the nation. My heartfelt condolences to their families.”

Apart from that many other celebrities took to their social media handle and mourned the death of soldiers.