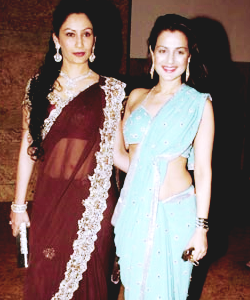 With all the news recently about celebrity friendships falling apart, we are pleased to present you with a refreshing article about the newfound friendship between starlet Ameesha Patel and Sanjay Dutt's pregnant wife, Maanyata!

The friendship reportedly began when Ameesha starred in a movie with Sanjay, and has grown to such proportions that Maana was one of the few people that Ameesha called after her grandmother's demise last week.

So just how close are the two?

Close enough that Ameesha has taken on the elaborate task of planning Maana's seven-month baby shower, and has been dutifully taking care of her pregnant friend, whose hubby is not in town to attend to her delicate needs. One such need is of course food! Since Maana can't travel much due to her swollen feet, Ameesha has reportedly been getting Maana's dinner from her favourite restaurants. Maana was also lucky enough to be gifted an iPad by Ameesha, so that she can simply laze in bed without getting bored!

One sure would like a buddy like Ameesha! Here's wishing the two cherished friends many happier times ahead.
6 Likes

Sanjay Dutt’s Lung Cancer is on Stage 4; Heartbreaking Sequence of ...

Shabana Azmi speaks about recovering from her Devastating ...
5 minutes ago

Who is AK in Sushant's Unseen Video that has Surfaced? Watch ...
9 minutes ago

No Bail for Rhea Chakraborty and Showik Chakraborty? Bombay ...
45 minutes ago