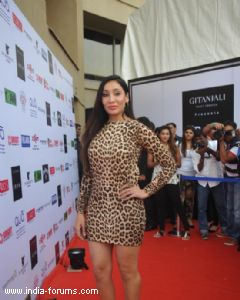 British singer-actress Sofia Hayat is in a state of shock ever since actor Armaan Kohli re-entered the 'Bigg Boss Saath 7' house and says that she is amazed to see him going back as one of the contestants in the reality show.

Armaan was arrested on Monday night for allegedly assaulting Sofia in the 'Bigg Boss Saath 7' house. Her complaint was the result of an argument that broke out between the two and Armaan ended up hitting Sofia with a mop, which left her injured.

However, he has resumed his stay in the reality show after completing legal formalities on Tuesday.

"I am shocked how Armaan got bail and how he is back in the 'Bigg Boss' house. I am surprised. I want to assure one thing that I am not going to give up and I will fight for this," said Sofia.

While the actor's father has been saying that Sofia is doing this for publicity, she said: "Why do I need this publicity, I don't need all these things. I have a very successful career. I don't need any publicity. I am only fighting against violence."

'Bigg Boss Saath 7', hosted by Bollywood star Salman Khan, features celebrities from different walks of life who are made to live together in a secluded house with over 80 well-placed cameras which pry on their activities 24X7.

7 years ago Wake up Sofia...it happens only in India! and he was booked under bailable offence... so there!

she is settig an example

its quite funny how rich people are always innocent

7 years ago she shouldn't be. Hasn't Lalu, Sanjay, Manu all the big shots successfully come out of jail too?
it happens only in India.