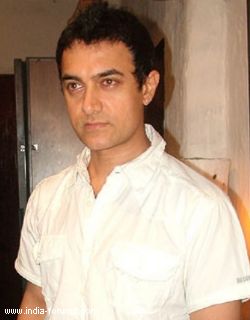 Mumbai, Oct 24 Aamir Khan, the latest Bollywood star set to make his television debut, confesses he does not know much about the TV industry but that could also work to his advantage as he likes to do things his way. The actor-filmmaker promises that his show, like his films, will be 'different' and connect with the masses.

Aamir is to host and produce a show that will bring real stories of people on the small screen.

'I am sure I will face difficulties when it comes to television...It is a field I know very little about. Fortunately, the people I am interacting with are very bright minded. So I am getting to learn every day. I am trying to absorb as much as I can,' Aamir told IANS in an interview. The actor's production company Aamir Khan Productions will co-produce the show with Star India.

The production of the yet-untitled show will start early next year and Aamir says he made an early announcement to put speculation at rest and it should not be seen as his new marketing strategy.

'A lot of rumours were coming up for some time now; so we thought we should put these speculation to rest. We made the announcement without a fixed date so we could at least give a brief insight to people as to what the show is going to be like. But calling it also a marketing strategy would be wrong,' he said.

If movies are about box office collections, television shows are about TRPs, but Aamir refuses to be dictated by any such thing.

'I would want more and more people to watch my show just like my films, but that doesn't mean I will add something extra to increase the TRP. I would rather focus on the subject and grab eyeballs. I can't think of adding 'masala' or anything in the format for TRPs. I am sure our TRPs will be good,' he said.

He added: 'I don't understand these terminologies. I don't know what USP means. I am not a very good marketing person. I just know my prime responsibility is to make way into people's heart.'

Aamir is not the first big Bollywood star to bow on small screen. From Amitabh Bachchan and Shah Rukh Khan to Preity Zinta and Madhuri Dixit, all have made their presence felt on TV in the last one decade.

Known as Mr. perfectionist in Bollywood Aamir says, 'I do not think my entry on television is late. I feel everything has a right time. My venture into television is not calculative. There is nervousness, but I am excited and charged up about the show.

'I was sure that if I would do something on television then it has to be different...it has to be something that will connect with the audience.'

What next after television?

The 46-year-old brought the change in promotional activities of movies with his Oscar nominated home production 'Lagaan: Once Upon A Time' in 2000 and rest is history.

'I am not a marketing guru, I think it is nothing but common sense. I make things that I am excited about; so naturally I would want more and more people to see it,' Aamir told IANS.

'I want to reach out to the maximum number of people to let them know, to make them aware (about my films), but ultimately it is their personal choice whether they want to see my film or my TV show now. But I always try to reach and connect with the masses,' he added.

In his over two-decades-long career Aamir has seen both highs and lows. After facing flak for 'Mann' and 'Mela', Aamir reinvented himself as a thinking actor-filmmaker and has given the industry cinematic pieces like 'Taare Zameen Par', 'PEEPLI [Live]', 'Dhobi Ghat' and 'Delhi Belly', which are high on creativity.

(Manpreet Kaur can be contacted at [email protected])