View Profile
Panic and chaos has broken amongst fans globally as we hear that the graceful and talented singer Alka Yagnik plans to bid adieu as a judge in SVOI. Speculations have it that the distasteful behavior of the judges in the show might be the reason behind Yagniks exit. The constant spats and bickering between Aadesh-Abhijeet-Jatin have often taken ugly turns, spoiling an evening that should be melodious rather than melancholy.
Being the only female judge on the show, Yagnik once stated in an interview on Telly Buzz that Main In sab pe bhari padongi. However, now upset with her fellow judge Aadesh Srivastav Alka claims that she cannot bear this Chikham Chilli anymore. There have been retaliating articles from the likes of Aadesh Srivastav, as well, declaring that if Alka stays he will leave. 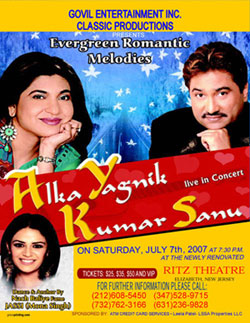 Featured Video
However, we are forced to wonder are these rumors on the bickering really the true reason for Yagniks outcry to leave the show? Only speculations can be done and one such investigation leads us to the upcoming Kumar Sanu-Alka Yagnik concert overseas. Apparently this concert has been advertised for since May and who knows Yagniks current exit from the show could be due her commitment to these NRI concerts. With the SVOI controversy just having emerged last week and this concert having been preplanned way ahead of time, we are left wondering whether the fire and smoke have been created on the show due to prior commitments?

Now the real question for us as viewers is that are we watching staged drama? Is reality television really real? Are the viewers being duped? And are these twists and turns scripted in order to increase TRPs?

For now the future of this reality show seems very bleak as the lines between what is real and what is scripted continue to blur, leaving the audience wondering whether to believe their eyes and ears on what they see and hear on the show. Truth will definitely find its own way but till then all we can do is keep the speculations going.
Author: Kirti, Dolly
Reporter: Barnali

15 years ago yeah, her concert is here in canada too very soon. that's why. i don't think she 's quiting.

15 years ago yah.its all for TRPS.all the negetive publicity is also for this.

15 years ago Sab kuch TRP ka khel hai. They don't care if the viewers are duped.

It's true, while watching, U do feel at times U are watching a staged drama. Especially when they so openly crib about the divide between the singers and the music directors, especially when all know they need to co exist as one cannot work without the other.

15 years ago all i can say is, dese reality shows sure do a gud job of trying 2 dupe ppl..y cant dey all focus on gud singing n d singers..in all dis, d singers get stuck...n its ultimately deir future at stake..