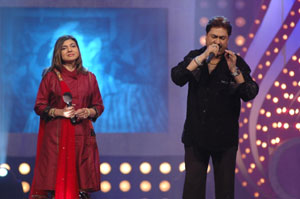 Who can bring back the essence of a Kishore Kumar number better than Kumar Sanu? And if he has Alka Yagnik for company, the thrill of listening to those great songs simply becomes indescribable. So it is Kumar Sanu and Alka Yagnik bringing on the nostalgia on K for Kishore on Friday night. Together they bring alive songs like Tere mere milan ki yeh raina…and Tumse badhkar duniya mein…

No mention of Kishore Kumar can be complete without anecdotes about his eccentricities and spirit of fun. So the celebrity judges have some fun challenges for the contestants on the show. So there is Chetan Rana doing an excellent job of singing out a news report from a Hindi newspaper ala Kishore Kumar while Nayan Kumar Rathod has to guess and sing a song as soon as Alka gives a clue! 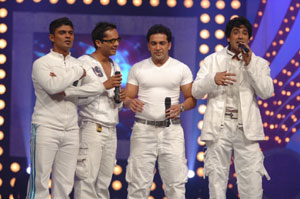 In the midst of all the singing and laughter there was some dancing and prancing too. Karan Oberoi with his Band of Boys added more zing to the evening with their performance. Asha Bhosle's grandson, Chin2 of Band of Boys, recalled going to recordings of Kishore da's songs with his grandmother where the maverick singer used to pretend to be accompanied by an imaginary child. The bitter truth about the song would be pointed out by the imaginary child and Kishore da would chide and reprimand the imaginary kid and say it is not good manners to point out that the tune was worthless!

It's a Celebrity Special on K for Kishore this weekend. Do not miss the songs, the anecdotes, Amit Kumar's comments, Bappi Lahiri's observations and Sudesh Bhosle's quick wit!

It's all happening on K for Kishore this Friday February 1 at 9 pm only on Sony Entertainment Television.

14 years ago kumar sanu rox seriously he rocked the 90's wish he cumz back on the scene he's a classic :D