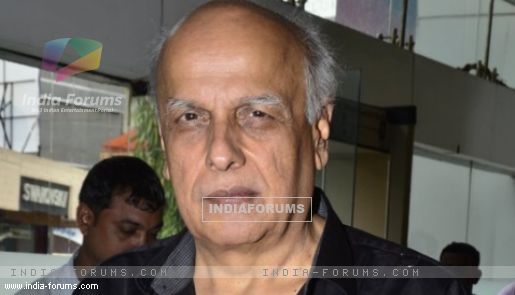 Filmmaker Mahesh Bhatt has never been hesitant in investing in newcomers and fresh talent. But when it comes to working with his own daughter, the young and vibrant Alia, he has his reservations.

Asked if he will ever work with his daughter, the 64-year-old, known for making serious and meaningful films including "Arth", "Saraansh", "Naam" and "Daddy", said an emphatic "No".

"She is a star in her own world, and I don't work with stars," the film veteran told IANS here.

With over four decades of experience in showbiz, he has given a chance to some of the then "not so known faces" who later went on to make a remarkable name in the film world. One such example is Anupam Kher, who witnessed a sudden boost in his career with his role in "Saaransh".

Alia, on the other hand, has became a youth icon, thanks to her successful roles so far. Be it for her role a student in her debut film "Student of The Year", a kidnapped rich girl in "Highway", an IIM student in "2 States" or a would-be-bride in "Humpty Sharma Ki Dulhania" - she won appreciation from all quarters.

Sharing his reaction on her career graph as a father and as a filmmaker, Bhatt said: "She is lucky to get what she wants." But for him, success comes with a clause.

"She got what we call 'the misfortune of success' because I was fortunate enough to be unsuccessful when I started and then I was groomed in the pain. She had the privilege to take a fantastic take-off in the industry and that too with diverse films. But it's still a beginning," he said.

Bhatt feels "she has to do a lot to keep on fulfilling the unreasonable demands that audiences make" because no one spares anyone in their failure.

"Remember this nation didn't even forgive Sachin Tendulkar, who had a spectacular take-off and when he leaned down, he had to face lot of criticism. This is public place, they worship success, but they hate failures too," added the filmmaker.