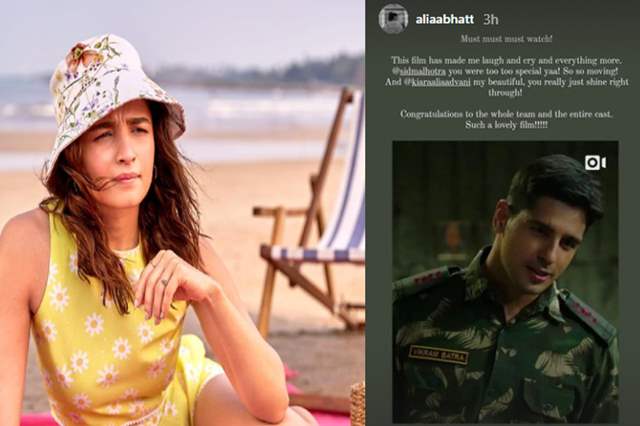 Shershaah released on Amazon Prime Video a couple of days ago and has continued to invite a lot of love and appreciation even as of now. While viewers have been vocal about their love and appreciation for the film, this time, critics have also liked the film. This is all the more special for actor Sidharth Malhotra, who plays the lead role alongside Kiara Advani. The actor, while considered to a rising star several years ago, has witnessed a string of unsuccessful films which were panned by the critics as well.

Hence, Shershaah act quite a resurgence for Malhotra and a much-needed success thus putting him back in the mix of his other contemporaries. And while the film has already received encouraging words from several celebrities as well, Malhotra's former partner and good friend, Alia Bhatt went on to congratulate the actor from her side as well. She posted a story where she wrote, 'must must must watch! This film made me laugh and cry and everything more. @sidmalhotra you were too too special yaa! So so moving! And @kiaraaliaadvani my beautiful. you really just shine right through! Congratulations to the whole team and the entire cast. Such a lovely film!!!!"- 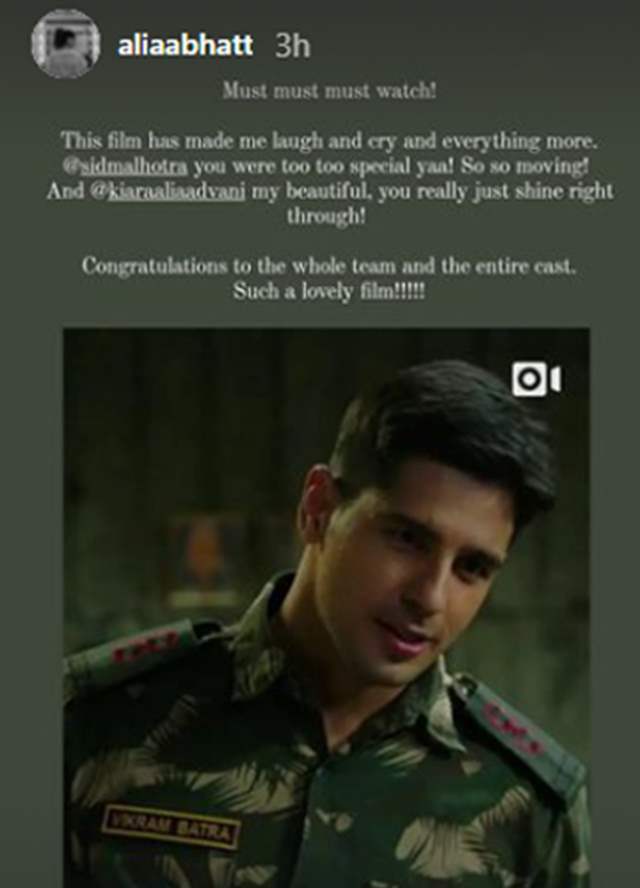 As one would remember, Malhotra and Bhatt were reportedly in a relationship together for a long time even though they publicly never admitted to the same. And now, it has been a while to that were Bhatt is dating actor Ranbir Kapoor and Malhotra is reportedly dating Shershaah co-actor Kiara Advani.

2 months ago Alia appreciating Capt Batra and mother filming No father’s in Kashmir. Hypocrisy to another level.

2 months ago Capt Vikram Batra is a national treasure. He is a legend and Bollywood has come to bask in his glory. PVC Capt. Batra is way beyond, these Bollywood Mafias. Thanks but no thanks, not interested in fake Bollywood patriotism.

2 months ago A good thing is that Sidharth Malhotra broke up with her if not her father Mahesh Bhatt would also say "you are drowing" to Sidharth like how he said to Sushant...only feel bad for Ranbir, poor guy got stuck.