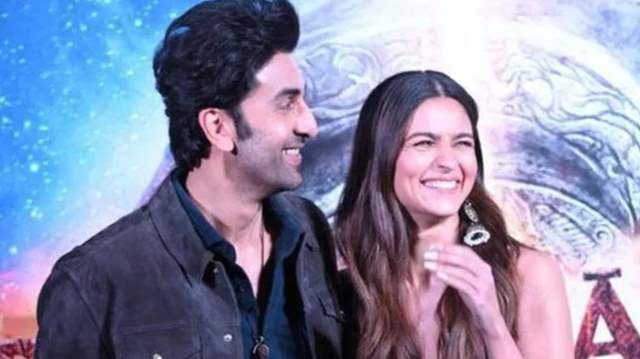 Alia Bhatt and Ranbir Kapoor are one of Bollywood's most celebrated couples. The two recently got hitched, and fans have been looking forward to watching their on-screen chemistry in Brahmastra. Audiences are in for a treat as the film's release date, as well as the trailer's release date, has been announced.

While the trailer release date was unveiled at an event in Visakhapatnam today with Ranbir, Ayan and S.S Rajamouli being a part of it, it was  Alia Bhatt's video message which stole the show.

Alia Bhatt filmed a video for all her fans because she was unable to attend the event in Visakhapatnam with Ranbir Kapoor and Ayan Mukerji in person. Fans burst into applause as they spotted the actress on the big screen in this footage, which was shown at the event. In the video, the Dear Zindagi actress invited all of her fans to see the movie on September 9th.

“I really wish I could be there today with everyone. I am missing the whole team, Ayan, and Ranbir. But I am there in spirit and especially there in Ranbir’s heart”, added the actress.

SS Rajamouli also came ahead and spoke in front of the audience, saying that Ranbir Kapoor is fortunate to have her in his life.

Alia Bhatt and Ranbir Kapoor will join hands for the first time in Brahmastra. The film also features Amitabh Bachchan, Nagarjuna, and Mouni Roy and is directed by Ayan Mukerji and produced by Dharma Productions. The film will hit the theatres on 9th September 2022

Meanwhile, Alia Bhatt is currently filming her Hollywood breakthrough project Heart Of Stone with Gal Gadot . In addition to this she has Rocky Aur Rani Ki Prem Kahani opposite Ranveer Singh in the pipeline.

+ 3
2 months ago Alia is so annoying. She’s so dumb and has no education. But she lives a luxurious lifestyle because of nepotism and innocent Indians giving her so much undue attention. A dumb bimbo like her deserves no attention, I guess .