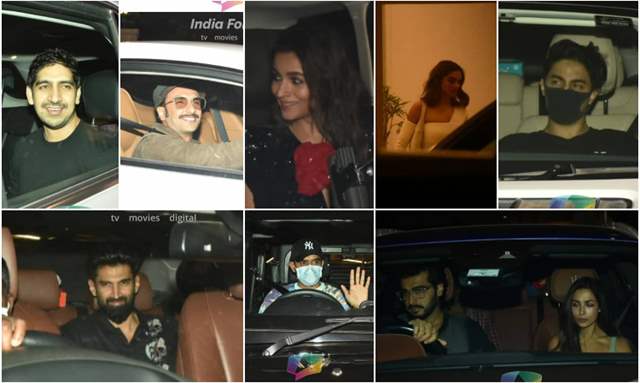 Bollywood actress Alia Bhatt turned a year older today and she was spotted outside Karan Johar’s house ahead of her birthday celebrations. A grand party was hosted by filmmaker Karan Johar at his residence which saw the arrival of Bollywood star couples Deepika Padukone, Ranveer Singh and Arjun Kapoor, Malaika Arora.

The Brahmastra actress was snapped in a black and red dress for the occasion and Shah Rukh Khan's son Aryan Khan was also spotted at the bash. Director Ayan Mukerji, Shakun Batra, film producer Arti Shetty, and Aditya Roy Kapoor was also seen arriving at Johar’s house for the celebration.

Recently, the actress had decided to postpone her birthday plans with beau Ranbir Kapoor after his coronavirus diagnosis, and it seems she decided to celebrate her birthday with some of her closest friends and colleagues.

Alia is one of the most talented actresses in Bollywood who made her debut with Student of the Year, co-starring Varun Dhawan and Sidharth Malhotra. She was launched by Karan Johar and he is referred to as her mentor. She has proved her mettle with critically acclaimed films, including Imtiaz Ali's Highway (2014), Abhishek Choubey's Udta Punjab (2016) and Meghna Gulzar's Raazi (2018), among others.

Today, Alia Bhatt turns 28-year-old and birthday wishes have begun to shower on the talented actress since midnight. Actress Priyanka Chopra took to her Instagram stories and wished the actress while Alia even received wishes from beau Ranbir’s mother Neetu Kapoor and his sister Riddhima Kapoor Sahani as well.

On the work front, Alia is all set to venture into Telugu cinema and she recently shared a silhouette of her from the upcoming film ‘RRR’. According to reports, the crew had a short schedule in Mahabaleshwar, and now the scenes which need Alia will be shot in Hyderabad. If we are to go by the reports, Alia will be romancing Ram Charan in the film.