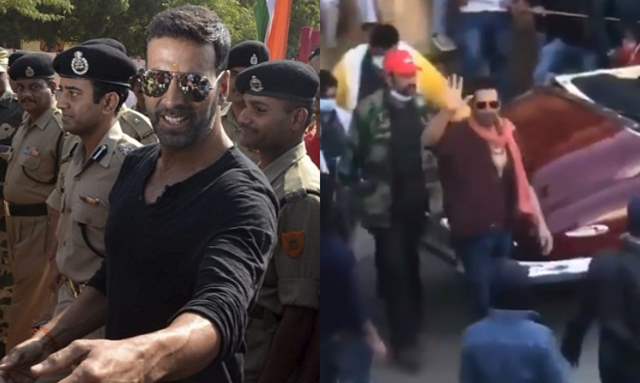 Akshay Kumar is currently stationed in Jaisalmer for the shoot of his upcoming film - Bachchan Panday. The film features Kriti Sanon, Jacqueline Fernandez and Arshad Warsi in key roles and it is being directed by Farhad Samji. The film is touted to be a comedy and will feature Akki as a dreaded gangster who aspires to be an actor.

Now, the videos of him from the location shoot have been going viral on social media and his fans are delighted to see their favourite star.

If we are to go by the reports, the Laxmii actor was seen leaving Nachna Haveli in the city. A video of Akshay exiting the gate went viral recently and he was seen entering a waiting car.

Another video featured Akki stepping out of the gate and greeting the waiting crowd with a namaste and waves to fans.

On the work front, Akshay Kumar recently stunned the audiences with his impeccable performance as a transgender in Laxmmi. Next up, he has his calendar full of exciting projects including Bell Bottom, Prithviraj, Ram Setu, Atrangi Re and more.