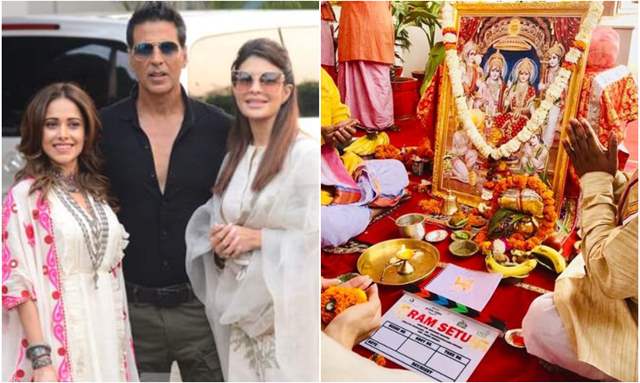 Akshay Kumar’s much-anticipated film Ram Setu is about to go on floors and the team of his upcoming film jetted off to Ayodhya on Thursday morning for the mahurat shot. The Laxmii actor was also joined by his female co-stars- Nushrat Bharucha and Jacqueline Fernandez.

Now, the actor has shared a picture of the Puja organised in Ayodhya, where he sought the blessings of Lord Ram before the film’s shooting begins.

Earlier, this morning, Akki was snapped at Mumbai’s Kalina airport with Nushtar and Jacqueline. The trio even posed for the paps prior to their departure for Ayodhya.

While the actors reportedly reached for Ayodhya for the mahurat shot, recent reports suggest that the shoot had been called off due to a heavy gathering of fans. The situation was reportedly so serious that security personnel and the police in charge of the safety of the actor did not let him get off the car.