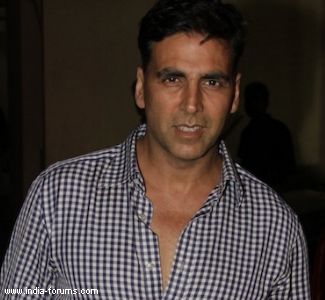 Khiladi Akshay Kumar returns to what he is best at - action. He will be seen packing some hardcore kicks and punches in Prabhu Deva directed "Rowdy Rathore" when it releases Friday.

Made with a budget of approximately Rs.40 crore, the film is a remake of Telugu film "Vikramarkudu". It is co-produced by Sanjay Leela Bhansali and Ronnie Screwvala. The film will be released in 2,300 screens in India and around 400 screens overseas.

The film revolves around Shiva (Akshay), who is a small-time conman. He is head-over-heels in love with Priya (Sonakshi Sinha), a pretty girl whom he met at a wedding he wasn't invited to. The picture perfect world of Shiva turns upside down with the entry of six-year-old girl Neha, who believes he is her father.

Shiva also becomes the victim of a series of life threatening attacks by a gang of deadly criminals, who seem to know something he doesn't. In the quest to save his life and love, Shiva stumbles upon a deadly secret, something which takes him to a small town in Bihar.

That town is ruled by a ruthless MLA and the mafia he controls. The inhabitants of the small town find a saviour in Shiva.

Akshay is said to have learned combat karate for his role in the film. He is seen sporting a rugged look in the film. The movie bosses had launched an online hunt for Akshay's look for "Rowdy Rathore".

The cast and crew of the film had a tough time shooting in Karnataka's temple town of Hampi. The shoot was disrupted after activists alleged that the makers didn't use the minimum number of local dancers that they had promised.

Sonakshi's red sari act in the song "Chhammak challo chail chabeeli" has compelled people to draw comparisons with Kareena Kapoor's "Chhammak chhallo" in "RA.One". However, the actress brushes it off as mere co-incidence and insists the two songs should not be compared.

Filmmakers have been coming up with innovative ways of promoting a film or launching the music and "Rowdy Rathore" too tried a new trick. The film's music was launched in a chawl in Mumbai.

This will be Sonakshi's second release after blockbuster "Dabangg".

After this, Akshay and Sonakshi will appear together in "Joker" and strike a hattrick with "Once Upon A Time Again".