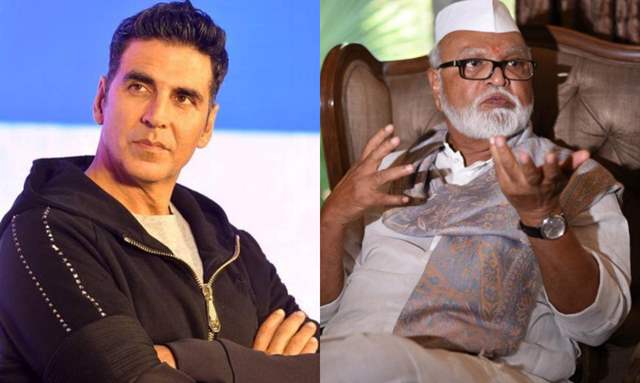 Bollywood superstar Akshay Kumar has once again landed himself in trouble as he reportedly made a trip to Nashik in a chopper. A Hindustan Times report suggests that the Food and Civil Supplies Minister and Guardian Minister of the district Chhagan Bhujbal has ordered an investigation as to how the actor managed to receive permissions for his travel and why Nashik city police provided him protection when he travelled to the rural part of the district outside their jurisdiction.

During a recent press conference at Nashik ,Bhujbal addressed the issue on Saturday morning. He also said that a probe will be conducted into allegations of violation of rules related to the Bollywood actor’s tour.

Following controversy over the actor’s trip, Bhujbal spoke to the media at Nashik on Saturday morning. He said a probe will be conducted into allegations of violation of rules related to the Bollywood actor’s tour.

Hindustan Times quoted Bhujbal saying, “I have asked the district collector to probe into the permissions given for his chopper, stay at Trimbakeshwar and why Nashik city police provided his escort when his tour was in rural part of the district.”

The report also mentioned that Akshay had visited Trimbakeshwar four days ago and had shared his visit photos on social media. Furthermore several media reports claimed that senior police officers met him during his stay in Nashik.

Maharashtra CM Uddhav Thackrey recently ordered the extension of Lockdown in the state to curb the spread of coronavirus. Following which people from the district raised questions about the permission during lockdown.

Questions about Akshay Kumar’s permission to stay at a resort in Trimbakeshwar when hotels, resorts have been shut for more than three months as part of the lockdown have been raised.

The local officials reportedly claimed that Akshay Kumar had visited Trimbakeshwar as he is planning to set up a Marshal Art and Meditation Centre in the vicinity. His chopper landed at Sakpal Knowledge Hub ground in Anjaneri and later stayed at Grape County resort near Trimbakeshwar.

Furthermore, Bhujbal was surprised to see the Nashik city police providing him escort, when the area falls in the jurisdiction of Nashik rural police. The report also stated that he was surprised with the VIP treatment the Bollywood actor received during his visit.

Meanwhile, Akshay Kumar is yet to react to his allegations.

Mages 1 months ago at last a minister taking strict action on BW stars who thinks they are powerful and can do whatever they want using their power, rules and regulations are for all and its strictly to be followed and BW stars think since the whole world knows them they own the world

Meena_J 1 months ago B-town biggies think they have the power to do whatever they want. TBH, he didn't even deserve the national award for Rustom.

Deb07 1 months ago This bollywood so-called people kuch jadai char gaya. Time to pull them down to road and shut down this corrupted place. SHAME

Even after seven decades of independence, are we really ...
-50 seconds ago