Mumbai, Sep 20 (IANS) Bollywood star Akshay Kumar, who will be seen hosting a cookery show, has reportedly come out with a cook book and gifted a copy to his 'Action Replayy' co-star Aishwarya Rai 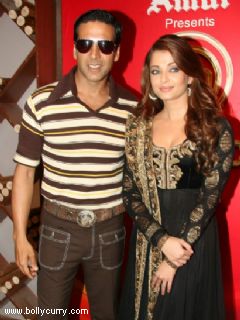 With Star Plus' new show 'MasterChef India', Akshay has not only delved into cooking but he has helped compile a cook book. This compilation includes his favourite recipes from among those the contestants have come out with and, of course, it has his famous Khiladi special sizzler, said a statement from the channel.

And not only that but when Aishwarya came to meet him on the sets of 'MasterChef India', the Khiladi surprised her by presenting this exclusive cook book.

So we wonder whether the beautiful Aishwarya will soon be serving her family gourmet dishes?

In 'Action Replayy', both Akshay-Aishwarya will sport a retro look. Based on a 1994 play of the same name, it is slated to hit screens Nov 5.