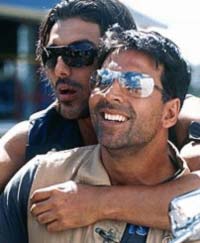 It sure is going to be sight be able to watch the sexy dudes of Bollywood, John Abraham and Akshay Kumar swaying their hot bods while swinging and cavorting around strip poles making the girls go weak on their knees.


Well, this has fantasy is being turned into reality by director David Dhawan's son Rohit who has managed the casting coup. The story of Rohit's directorial debut, revolves around two young jobless men, struck by recession. In order to earn their daily bread and butter, they end up pole dancing at a strip club and vie to outdo each other.  John and Akshay will be essaying the roles of these men. Both the men will undergo extensive training for pole dancing in LA before the shoot begins and the film is scheduled to be shot in some of the most exotic locales.


The film is being produced by Akshay Kumar's home production HariOm Productions.


For John, the role can be a cakewalk as he is quite comfortable with skin show. His salacious trunk stint in Dostana not only left females, but also males, gasping for breath. John has reportedly done a Full Monty in yet to release Yashraj's New York. Akshay too has recently done the controversial and daring unbuttoning act for a popular jeans, by wife Twinkle, at Lakme India Fashion Week, he too might not have inhibition dropping his pants in the film. So both the guys have that attitude to carry the characters. Akshay and John were last seen in Priyadarshan's comedy flick Garam Masala where they were busy chasing girls and clicking their hot photos.
Featured Video