View Profile
Cameos in movie are very common these days. For almost every movie some or the actors are there in special appearances. In this segment, movie 'Om Shanti Om' did a remarkable 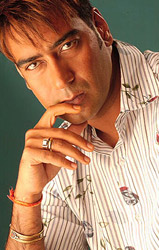 Featured Video
job. The title song of the movie saw thirty-one actors coming together for a song. Farhan's next flick 'Luck by Chance' will also see many film fraternities making guest appearance in the movie.
Similarly, the movie 'Teen Patti' will see many stars descending in and out of the movie. Until now, it was known that Ranjeet and Akshay Khanna would play a small role in the movie. Now the buzz is actor Ajay Devgan will also be a part of this film.

The interesting thing is that whenever this film gets in some actor for cameo the buzz remains that it's all on the request of Mr. Amitabh Bachchan that the actor has roped in for a role.

Wondering that is Mr. Bachchan so obssessed by this film that every now and then, he keeps requesting actors for playing cameos.


Well, we can just say a good trick to keep the movie in happening list, lets wait and watch how far the movie will be happening.

Karan Veer Mehra: While portraying Abhay, I try to keep myself in ...

exclusive
Exclusive Viewers will see a totally different me in ‘Yeh Hai Chahatein’: ...