Speaking about her first family tour, Aishwarya told IANS: 'Yes, it's on in July and August. It's wonderful to be on stage with Abhishek and Pa (the Big B). I remember how wonderful it was when we did 'Kajra re' at the IIFA (International Indian Film Academy) awards two years ago,' she said.

'That one act featuring the three of us was a rock concert by itself. It was fantastic! Now going on stage as Amitji's daughter-in-law and Abhishek's wi 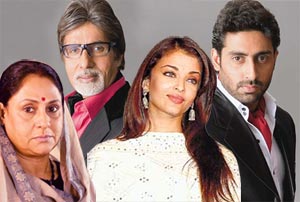 fe would make it doubly fantastic.'

The announcement puts an end to speculation regarding the financial and creative feasibility of this celebration of family bonhomie.

Hrithik Roshan and Akshay Kumar were supposed to join the Bachchans on the tour. They opted out citing lack of time. Now the final list of actors joining the Bachchans includes Bipasha Basu, Lara Dutta and Riteish Deshmukh.

Though Jaya isn't much of a dancer, the Bachchan clan loves to groove together.

'You know, we really do have a good time on stage. I've watched pa's earlier concerts, and I've seen how he rivets the audience. Even now when he chooses to go on stage once in a while, he truly has a blast. Abhishek has a party on stage. All three of us love live concerts,' Aishwarya said.

'And we genuinely love music and dance. That's one thing we have in common. So we're going to have a grand party on stage. And I hope the audience enjoys it as well.'

And would 'Kajra re' still be a part of the Aishwarya's stage repertoire?

'Is it possible for the three of us to go on stage and not do that song? Sharing screen and stage space with my husband and father-in-law has always been very special. It just can't get any more special than this for me,' she said.

'It doesn't matter how many shows we do. Just the three of us interacting with a live audience is a very special occasion. We'll be up there for the audience, and the audience hopefully will be cheering us,' Aishwarya said.

Raavi accuses Rishita for spoiling the cement; Dev and Shiva’s ...