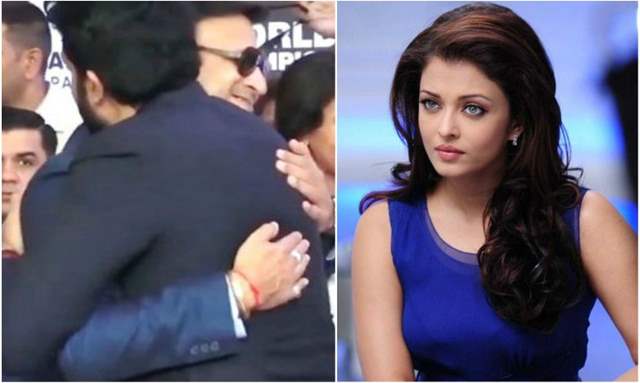 It has been a few days since the video of Abhishek Bachchan and Vivek Oberoi hugging at the felicitation ceremony of ace badminton player P.V. Sindhu made headlines. The reason behind the over-publicized affection was because a few months back Vivek had taken to his official social media handle and he had posted an offensive meme mocking Aishwarya Rai Bachchan.

In the post he had drew comparisons between poll results and Aishwarya's personal life relationships. At that time no one from the Bachchan family had reacted to the fiasco, although many reports stated that Abhishek was furious with the Masti actor.

Now according to the report in Deccan Chronicle, Aishwarya is not pleased with Abhishek’s sweet gesture towards her former lover at the felicitation ceremony of ace badminton player P.V. Sindhu. As per a source quoted by International Business Times, Aishwarya is apparently upset with Abhishek and wanted to know "why he was so warm to Vivek when he could have just said a polite hello and moved on."

(Also Read: Abhishek Bachchan-Vivek Oberoi Hug It Out at a Felicitation Ceremony)

In the video, Abhishek and Vivek can be clearly seen sharing a warm hug, with smiles on their faces, at the red carpet of the felicitation ceremony.

A source close to Bachchan’s, as quoted by International Business Times, said, “Unlike Salman Khan who never forgave Vivek Oberoi for calling a press conference to condemn Salman's behaviour regarding Aishwarya, Abhishek chose to forget how obnoxious Oberoi can be. Instead Abhishek would rather focus on the positives in life.”

But it looks like Aishwarya has started losing her calm after her husband Abhishek's diplomatic hug to her former boyfriend whom she had bad experiences with.

One Night Before Aishwarya- Abhishek's Wedding an Unfortunate Event ...

Abhishek wanted to have a Daughter and a Son with wife Aishwarya; ...

Abhishek's Friend Never Visited His Film's Sets after What Happened ...

Sooraj Pancholi Slams Reports of Affair With Disha, Link Up ...
23 minutes ago

"I Personally Feel that this is the Time for Us to Delve and ...
54 minutes ago

Karan Aanand prays for people who lost their lives Beirut ...
59 minutes ago

Kartik Aaryan receives a Massive hike for the remake of Allu ...
59 minutes ago