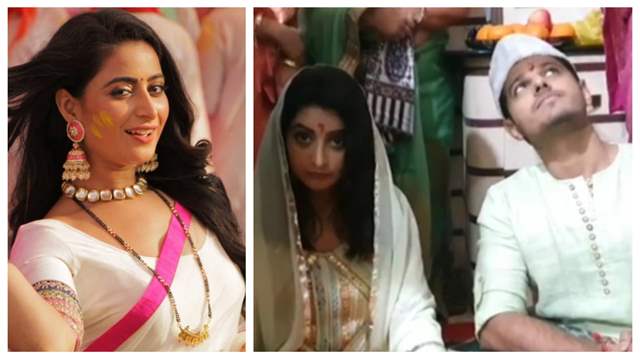 Being on social media indeed has its perks and issues but more often that and owing to absolute freedom, lately, trolls have been more prevalent than ever and fans go on to reply to some posts or comments of celebrities.

While there is literally a bundle of them that keep taking place, at times the celebrities decide to give it back to these trolls in one way or another. That's what happened with actor Aishwarya Sharma who plays the parallel lead in Ghum Hai Kisikey Pyaar Meiin alongside real-life fiancee, Neil Bhatt. She shared an unseen video from her roka ceremony with him captioning,  "When we both were confused at the time of Roka. Me and Neil were wondering what is going on man....?" The caption didn't go down well with a follower who called her out for making fun of her Roka ceremony.

While many others would have been ignored, this time, Sharma decided to give it back to troll as she replied, "OK BC means "before covid"???? If yes so Let me tell you it was after and during covid.. And haan Roka toh mera hi tha.. Ab rok sako toh rok lo. And also Goodluck for your future."

That was indeed a perfect response by the actor.

a month ago The comment was very mean especially the part that" you don't Aisha deserves Neil". Unnecessarily bringing that girl also in the mess. The reply was witty indeed.

a month ago Jeez Louise 🙄, just ignore them Aish and continue to be ghum in Neil’s pyaar. 🌷✨

+ 3
a month ago Good on her. The comment was really nasty. People lose their heads over what actors post on their own social media handles and who they are dating 🤷‍♀️ Neil and Aish are grown ups and happy with each other. No one else has any business to comment on their suitability for each other.