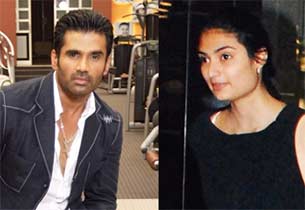 No films, no commitments, and not even the excitement of his daughter Athiya's film debut - Suniel Shetty has put aside his work and priorities for the sake of his father, who is unwell.

To make sure his father is comfortable, Suniel has even converted an entire flank of his home in South Mumbai into an ICU.

"I haven't had a proper night's sleep for three months now. It's a very mixed kind of feeling for me. On the one hand my daughter Aathiya is getting ready for her film career. On the other hand my father is very unwell," said Suniel.

Athiya has left to shoot for her debut film "Hero" with Suraj Pancholi in Manali.

"The excitement of Aathiya's debut is sadly diminished. At the moment we're all focusing on looking after my father," said Suniel.

His father's frail health is the reason why Suniel was away from the Celebrity Cricket League matches.

Suniel is aghast about the stories that he had an on-field fracas with Aftab Shivdasani.

"How can I 'come to blows' with anyone, least of all a guy as sweet and gentle as Aftab? It is very embarrassing to read such stories, specially at a time when I am going through a personal crisis. Right now nothing is more important to me than my father's health," he said.

Suniel is in fact saying no to movie offers.

"There will be many opportunities for work later. The time spent with my father now is much more vital and valuable," he said.

He is not the least perturbed about his daughter's shooting schedules outside Mumbai.

"I know she's in completely safe hands. Salman Khan's production crew is like family to us. They look after both Aathiya and Sooraj like their own children," he said.

Amanda Seyfried Announces The Birth of Second Baby
50 minutes ago

NCB Dismisses Rhea's Claim of 'No Jurisdiction in Drugs ...
51 minutes ago