View Profile
Having got her big break opposite Shah Rukh Khan in ‘Om Shanti Om’, Deepika Padukone will now be seen with Sharman Joshi in Rakesh Roshan’s unititled next celluloid venture. Incidentally, the success of ‘Om Shanti Om’ has sky-rocketed Deepika’s demand among the Bollywood crop of directors and now we learn that the lass is demanding a whopping Rs one crore fee for each film that she is signing! 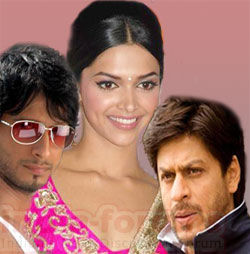 If both the news makes you raise your eye-brows, we have more for you. We are told that when Rakesh Roshan decided to take up the new venture, he had thought of casting a more popular face as the film’s hero. However, as it is basically a heroine-oriented film, no actor worth his name or value was willing to oblige the senior Roshan. Hence, he had to settle on Sharman Joshi.

Now what remains to be seen is how the new celluloid pair fares at the box office. The audience as well as those in the industry not only has great expectations from Rakesh Roshan, whose all previous films have been super-duper hits, but also on Deepika. We earnestly hope and pray that this film also proves to be a boon for Deepika, for Bollywood has the unique reputation of elevating a non-entity on Cloud 9 in one movie and then tumbling them to obscurity in another. We sincerely hope that this does not happen to Deepika.