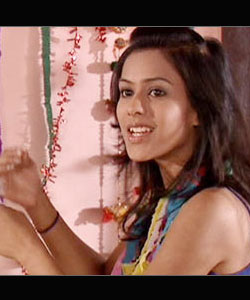 Nia Sharma who essayed the daring girl Anu in Star Plus' Kaali Ek Agnipareeksha will now be seen in Behenein on the same channel..

A source from the sets of the Star Plus and Hats Off Productions show said, "Nia Sharma has started shooting from yesterday. She essays the role of Nisha who is Jay's (Akshay Anand) daughter. Jay has kept it under wraps that he has such a grown up daughter. Smriti (Shiju Kataria) will be shocked when she will get to know of this fact".

Nisha we hear is a spoilt brat who can do anything to get what she wants. With her entry, her love track will also be shown.

When contacted, Nia Sharma said, "Yes, I am entering Behenein and will be essaying my own age. Nisha is a spoil brat, pampered and will create havoc if something goes against her. It will be an interesting entry in the show".

This comes after Akshay Anand was brought in to play the role of the older looking Jay in place of Anand Suryanvashi.

We look forward to Niaa Sharma's next stint post Kaali..

-GredForge- 9 years ago thx for the news !!!it looks interesting even though i dont watch behenien!

tanvismile 9 years ago hey this very good ,i m glad for her ,looks like she is also favourate of star like jennifer winget

Shreyacool 9 years ago I really miss Kaali, it was an awesome show. Best of luck to neha for her new show:)

They should just end it!!

siyona 9 years ago though i dont watch behenein congo to neha for her new show..!! she is a good actress n also on dis show she will playing akshay anand's daughter ..;) sweet