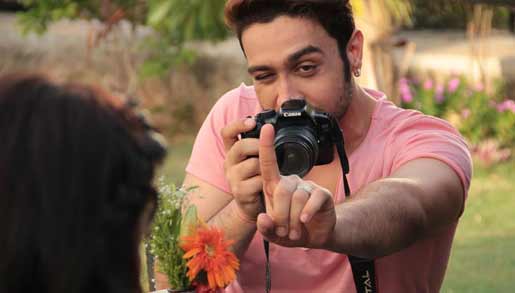 On the sets of 'Ishq Click', Adhyayan Suman was so carried away by his love for cameras that during breaks, he would go around the place clicking photos of the scenery and everyone around. His love for photography is not well known to the masses, but his close friends are well aware of it. He clicked pictures of his leading lady Sara Loren during one of the shoots and the beauty obliged.

According to the sources, Adhyayan was seen getting along with his co-stars and rest of the cast, greeting them. He had an amazing time shooting for the flick. Whenever he was free, he would take his camera to click photos. Once while shooting a scene, he felt that the light were apt for a good morning click. So, he asked Sara to pose for him and he clicked many pictures of her.

Usually, after breakfast or lunch, the entire cast would go for long walks. Adhyayan, along with director Anil Ballani would go about the sets clicking pictures. At times, producer Ajay Jaiswal too, would join them. They would pose for the actor and have a good time. After sometime, the entire team would be back to continue with their shoot.

Adhayan as a kid was very fascinated with a camera. He would love posing for his father and has a good collection of photo albums. He wanted to learn photography, but he started off very early in Bollywood and due to strict schedule, he couldn't pursue it.

'Ishq Click' is an intense love story that takes you on a ride to the most creative, but also, shocking corners of a human minds. It's a romantic thriller, Directed by Anil Ballani and Produced by Music Director Ajay Jaiswal.