View Profile
After the grand event that was Aishwarya Rai's baby shower, the celebration continued into the evening with 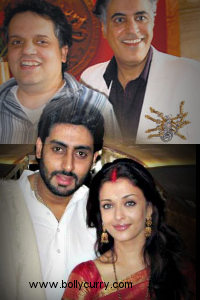 designers Abu Jani and Sandeep Khosla hosting a private party at their Bandra residence for the Bachchan parivaar. Buzz is that the do was a close-knit affair with only the Bachchans and people close to the family being invited.
Owing to the privacy of the affair, not much was revealed of the programme. However, a source reveals that people who attended Aish's godh bharai at Jalsa were also present at the party. They continued to shower her with their blessings whilst Papa Abhi looked on from a distance.

The menu comprised of traditional Indian and South Indian food with, of course, Aish's favorites also being included, cooked to her very taste since the mother-to-be is currently fussy about having her edibles plain and simple. Though, the party did wrap up early as Aish had to sleep as per her temporary schedule.

Our source further quips that Abhi-Aish were gifted a lovely pair of matching ethnic wear specially designed for the couple, by the duo, with Sandeep stating that they wanted to wish a world of happiness to the baby.

All we can say is, this li'l bundle of joy is much awaited not only by the Bachchans but the whole of tinsel town as well!