Mumbai, Jan 11 (IANS) Finally the cast of Rakeysh Omprakash Mehra's 'Dilli 6' is in place and the director says Abhishek Bachchan was his first choice for the male lead.

'My first and instinctive choice for the part was Abhishek Bachchan. And I met him right after RDB ('Rang De Basanti'). Then the dates didn't work out,' Mehra told IANS.

'We decided to come together for a later film. But fortunately it finally worked out. But it wasn't as though I was just waiting. I kept working on the script. We tried to get other actors. But the role belonged to Abhishek,' he added. 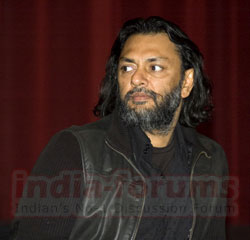 The film, which will feature Sonam Kapoor along with some seasoned actors like Waheeda Rehman, Om Puri and Pavan Malhotra, is Mehra's autobiographical.

'I've managed to distance myself from the screenplay. Having said that, let me also say that every film I make will have a slice of my life. 'Dilli 6' more so than others.'

Q: There's been a long gap between 'Rang De Basanti' (RDB) and 'Dilli 6'?
A: This is my natural pace of working. RDB came three years after my first film 'Aks'. I'm coming after two-and-a-half years with 'Dilli 6'. After 'Aks', I was unlearning my mistakes. My biggest shortcoming in 'Aks' was the screenplay. It has taken me six years to understand the concept of the screenplay. Now I know the most imperative part of my creative system is to know what needs to be gotten out on screen. The urge to make a film should be like an obsession. 'Dilli 6' is the one I'm dying to make now.

Q: The casting of the male lead in 'Dilli 6' was a problem.
A: The casting has been a journey. My first and instinctive choice for the part was Abhishek Bachchan. And I met him right after RDB. Then the dates didn't work out. We decided to come together for a later film. But fortunately it finally worked out. But it wasn't as though I was just waiting. I kept working on the script. We tried to get other actors. But the role belonged to Abhishek.

Q: You were actually supposed to launch him.
A: Yeah, in a project called 'Samjhauta Express'. We at that time were two young guys stepping into filmmaking together. Today, at 42, I'm not so young. Abhishek is still young. He's a natural. I'd have got as much out of him as an actor in his debut as I will now in 'Dilli 6'. Even 10 years from now he'll have something exciting to offer. We're both instinctive in our approach to cinema. To me Abhishek is very special.

Q: And what made you pick Sonam Kapoor?
A: Once I saw the promos of 'Saawariya', I saw my heroine jump out of the screen. That was enough for me to call her and her father Anil Kapoor. Then I saw 'Saawariya' and I was completely convinced of my decision.

Q: 'Dilli 6' recreates vignettes from your own youth in Delhi's Chandni Chowk. How personal would it be?
A: I've managed to distance myself from the screenplay. Having said that, let me also say that every film I make will have a slice of my life. 'Dilli 6' more so than others.

'Aks' was the least personal. It was my first film, and not necessarily by choice. I was finding my way into the cinema business with 'Aks'. The film that I wanted to make first is yet to be made. The screenplay constantly keeps mutating.

To me the screenplay keeps changing until the day I go on the floor. According to me, the shooting belongs to the play 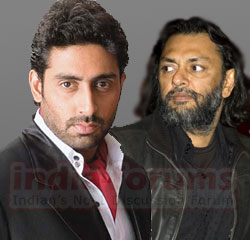 ers. The coach has done his job by creating an environment where the players do their best. On the floors my job is that of a referee. I just have to keep the players within boundaries.

Q: You've been singularly fortunate with actors.
A: Oh yes, and in 'Dilli 6' I'm blessed because I get to work with Waheeda Rehmanji again. When she was a little reluctant to do RDB, I had told her very seriously that I'd erect the set outside her Mumbai home in Bandstand. Her car would've to pass through my set every day. I was very serious about this. My producers looked shocked but it didn't matter to me. Now in 'Dilli 6' she has a far more pivotal role. I'm blessed to work with her twice. The film also has Om Puri. He's perfect for the part. He has kindly adjusted his dates in spite of the delays. Then there're Atul Kulkarni, Divya Dutta, Shefali Shah, Supriya Pathak, K.K. Raina and Pavan Malhotra.

Q: What about the music?
A: A.R. Rahman has already done the score. We finished two months ago. And I'm working with two great writers, Kamlesh Pandey and Prasoon Joshi, on board. I'm co-producing the film with UTV. Ronnie Screwvala and I share a very special bonding. We understand each other's vision. We balance each other's creativity out. We went through both turbulent and smooth weather during RDB. So that made our bond stronger. Now I'm completely nervous, though in a good way.