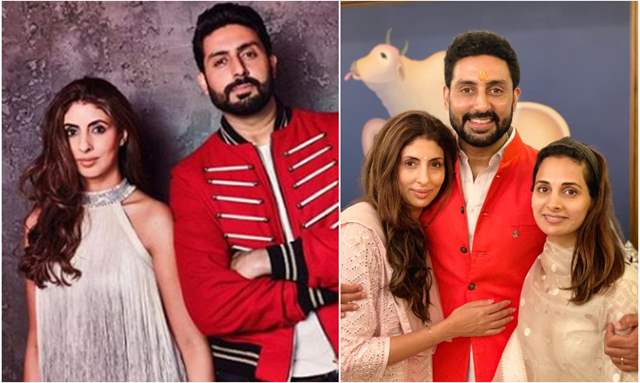 The Bachchans have started the week on a happy note as actor Abhishek Bachchan unveiled the teaser of his upcoming film ‘The Big Bull’. Now, the family celebrates elder daughter Shweta Bachchan-Nanda’s birthday who turned a year older today. The brother-sister duo shares a close bond with each other and they often treat their fans with cute pictures from childhood.

However, it was Shweta’s younger Abhishek who surprised his sister with a cute memory on social media. The Guru actor kept up with his tradition to surprise his 'big sis' with an epic picture on her birthday which also featured their dad and megastar Amitabh Bachchan.

Taking to his Instagram handle, the Ludo actor shared an ultra-rare picture of Big B holding little Abhishek and Shweta in his arms and posing for a photo. His caption read: “Happy birthday to the big sis. Love you.” Little Abhishek could be seen having a naughty expression on his face in the photo while Shweta seemed to be lost in thought.

For the uninitiated, Shweta Bachchan-Nanda is a former model and now an author and columnist. She partnered with designer Monisha Jaising and launched her fashion label, MXS in 2018. Shweta tied the knot with Nikhil in February 1997 who is a businessman.