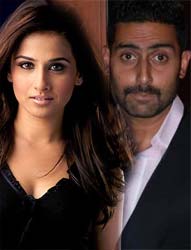 Abhishek Bachchan and Vidya Balan who were shooting for R Balki's 'Pa' were in for a rude shock during their last shoot sequence in London at 'Cambridge University.'


The two actors along with the entire crew of the movie were asked to leave the Cambridge University grounds as the lead actors were standing on the lawn grass.


The University follows strict laws, and nobody with the exception of the scholars are allowed to set foot on the grass in the small gardens of the campus.


The incident took place on June 20 at 6:30 in the morning. The crew had set up their cameras early in the morning as they believed that they could complete their shot without disturbance but were shown the door out just before Balki could utter out 'Action.'


The concerned authorities remained undeterred from their stand even when the director 'Balki' tried to reason with them.


The sequence was later captured in a different college far away from the Cambridge University.


Also, to avoid any further hassles Balki decided to adopt a non-grassy area.


Pa, slated for year end release will witness Abhishek Bachchan portraying the role of Amitabh Bachchan's father.  Big B will be playing the role of a man suffering from progeria, because of which he ages faster than the others.