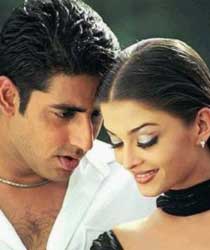 Abhishek & Aishwarya are at the moment shooting for Mani Ratnam's mega budget "Ravan" and recently while shooting, they left with Mani Ratnam on wednesday morning to check out an Elephant which was supposed to participate in the shooting for the movie from the following week.


While checking out the elephants, Suddenly an elephant went berserk killing the mahout and taking off on a stampede that had Abhishek, his wife and director hiding in the jungles until people who could control the elephant and rescue the couple could reach.


The trio had to hide until someone could come and rescue them, while they where hiding from the elephants back home their parents were worried to hear from them.


They did'nt anticiapte that they had spent their day in the jungle hiding from the elephants and that too without food for almost 10 hours.


The trio got rescued late night and could finally take breath..


Aish & Abhi also said that they needed some quality time together.. so whats this.. its surely romantic or better thrilling!!
Featured Video